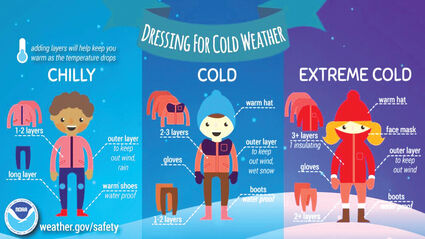 RITZVILLE - It's going to be a cold, white Christmas.

Adams County was under a Wind Chill Watch on Monday, with a Wind Chill Advisory kicking in until Friday morning, according to the National Weather Service.

"For the Wind Chill Watch, dangerously cold wind chills as low as 30 below zero possible," a statement issued by the weather service said.

After Tuesday, the temperature was expected to increase only enough to move from a watch to an advisory.

"Wind chill values may fall to extremely dangerous levels," the advisory said. "Exposed skin may become quickly frostbitten or frozen. The dangerously cold wind chills could cause frostbite on exposed skin in as little as 30 minutes."

Meteorologists advised residents to remain indoors until conditions improve later in the week or over the weekend.

"If you must go outside, dress in layers. Several layers of clothes will

keep you warmer than a single heavy coat," the advisory said. "Cover exposed skin to reduce your risk of frostbite or hypothermia. Gloves, a scarf, and a hat will keep you from losing your body heat."

The National Weather Service predicted a high of about 11 degrees on Wednesday, 7 degrees Thursday and 16 Friday.

Overnight lows were expected to be about minus-8 Wednesday night and minus-1 Thursday night.

As the extreme cold moves out of the area Friday, residents can expect a chance of snow on Friday and Saturday, and possibly freezing rain on Sunday, Dec. 25, Christmas Day.

The Christmas Day high is expected to reach 33 degrees.