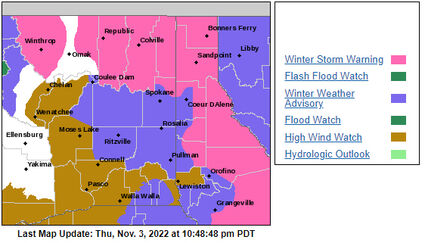 The map shows the list of watches and warnings around the region.

PASCO - Batten down the hatches.

The first storm of the 2022-23 winter storm is moving into Eastern Washington, bringing with it snow in some areas and high winds across the Columbia Basin.

As a result, the National Weather Service has issued a high wind watch for Franklin, Grant, Benton, Walla Walla and other counties in Washington and Oregon.

The watch will go into effect mid-day Friday and extend through Saturday morning, meteorologists said.

According to the National Weather Service, 40-50 mph sustained winds out of the southwest are expected across Franklin County. Wind gusts of up to 65 mph are possible.

"Damaging winds could blow down trees and powerlines," the watch said. "Widespread power outages are possible. Travel could be difficult, especially for high profile vehicles."

The daytime high temperature is expected to reach 62 degrees on Friday and 66 on Saturday.

But while its warm and windy here, a winter weather advisory has been issued for areas nearby, with snow expected through Friday morning and resuming again Saturday night.

Areas of Whitman County were expected to get 1-3 inches of snow overnight Thursday and possibly a half-inch again on Saturday night.

Friday and Saturday, the daytime highs should reach into the upper 40s, melting the snow. But overnight lows in the upper-20s are expected to freeze the snowmelt, making roads slick, meteorologists said.