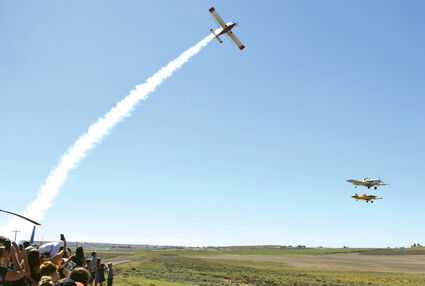 Donald Marshall | Special to The Journal

Four local aviators participated in flyovers Saturday, July 16, in honor of Gavin Morse, a Lind ag pilot who died when his crop-dusting plane, an Air Tractor AT602, crashed earlier this month.

LIND – Hundreds turned out Saturday, July 16, to remember a local pilot and family man who died in a plane crash earlier this month.

Gavin Morse, 38, of Lind, died July 2 when his Air Tractor AT602 agricultural plane went down in a field in the 300 block of Lind-Warden Road, near the North Roxboro Road intersection, according to the Washington State Patrol.

Morse, a cropduster known throughout the region, was remembered at the GEM Air, Inc., complex east of Warden. He co-owned the company with his wife, Erin Morse.

"Hundreds were in attendance," Donald Marshall said in an email to The Ritzville-Adams County Journal. "Four of his fellow ag pilots participated in flyovers at the end of the service.

"Gavin's ashes were spread from one of the cropdusters over the field on the north side of the airstrip, then the three other aircraft approached the facility from the east and one plane pulled up out of the 'missing man formation' as a salute to their fallen comrade."

Morse had been a commercial agricultural pilot since 2007.

The fatal crash was one of three aviation-related incidents in the area in a span of two days.

In the other incidents that weekend:

• Kevin Kennedy, 65, of Arlington, was flying his Beechcraft Bonanza from Arlington to Colfax when he crashed in a field off state Highway 26 near Lacrosse. The Whitman County Sheriff's Office reported the plane lost power. Kennedy and was airlifted to Sacred Heart Hospital in Spokane for treatment of crash-related injuries.

• The Adams County Sheriff's Office was called for a possible airplane crash off East Schoessler Road on July 2. A plane had slid off the runway while parking and struck a fence, records show. There weren't any injuries and those at the scene said they didn't need assistance.