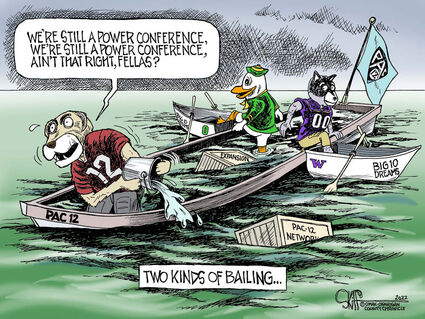 It's amazing when a person retires and there is a holiday.

When I was working, I really looked forward to having the day off. But when you're retired, it is seemingly just another day like all of the others - except that some businesses are closed and the mail will be a day late. (That's okay; I've adapted quite nicely.)

You most likely heard the bombshell that UCLA and USC will be headed to the Big 10 in a couple of years.

The payout for the two schools will be $80 million to play in the new 16-team conference. I wonder when they will finally change the logo. Or maybe just have the Big 10 logo with 'To be continued' at the end of it...

Now, I can't blame the two LA schools for the big yearly payouts. Nut please don't tell me this will help the student-athletes be better academically.

At least COVID-19 helped students be more proficient at online education. With as much flying time and less classroom time, the laptops will be a key to the college learning experience.

Last week, the Pac 12 commissioner was talking about trying to get scheduling of football games so that each team will play each other home and away in a four year span. I think the present commissioner was blind-sided by what the two LA schools did.

But scheduling will be easier with 10 schools, even though we know there will be more than 10 schools down the road.

I saw a map of the new Big 10 and I'm wondering how much fun a weekend basketball trip to College Park, Mary., and New Brunswick, N.J. will be. What great rivalries will start up on these road trips?

The shortest trip that the two schools will make will still need to cross two time zones and the longest is three.

We've heard how this will affect the rest of the 10 schools in the west and I'm sure there is a bunch of scrambling going on to find a good fit for replacements. To do that, the conference will need to grab a team or two from other leagues in order to make that happen. We certainly aren't happy unless our conference has all of the good teams from your conference. Wow...

I know there are some schools wondering if they might get invited to the mega-conference.

University of Oregon and University of Washington were told the Big 10 will be holding at 16 teams - that is unless they can convince Notre Dame to stop being a football independent, and in basketball, leave the ACC.

We are told those negotiations are to be left to the imagination. But they could also be happening right now!!!

As a Baby Boomer, I remember when there was the Big 10 with 10 teams, the Big 8 with 8 teams, the Southwest Conference, SEC, Pac 8, WAC, ACC and the Big East. They all had good teams and it was fun when two powerhouse teams from opposing conferences played each other. There were bragging rights on the line. Not anymore, since a lot of those teams are now in the same conference.

To me, it is a bit murky and money is the thing that every college president is trying to grab. As well as the next great coach for the football or basketball team. I hope they are still doing research in the college of sciences.

We are still hopeful for Washington State and Oregon State - two schools that could be left out. I'm sure Oregon and Washington put in a good word for them.

One thing I haven't heard about is where the Rose Bowl will be in the years they don't host a semi-final game for the national championship.

We know that the Big 10 will have a spot, but without the two LA schools will the Pac whatever it ends up to be have an invitation to play New Year's Day in Pasadena?

I can honestly say that I have never been a fan of Big 10 sports. Now that UCLA and USC are going to be members, I have two more reasons to not like the conference.

- Dale Anderson is a sports columnist from Ritzville. Email him at [email protected]