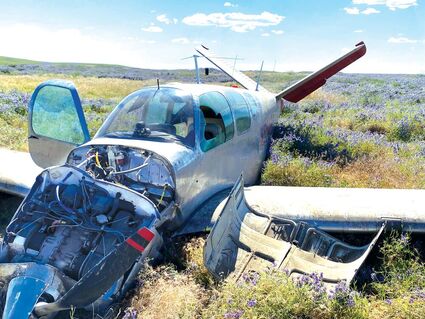 A Beechcraft Bonanza that crashed near LaCrosse on Friday afternoon sustained damage to the frame and engine, but the windows remained largely intact.

LACROSSE - Federal Aviation Administration and National Transportation Safety Board officials are investigating two airplane crashes over the Independence Day weekend, including one just off state Highway 26 near LaCrosse.

Kevin Kennedy, 65, of Arlington, was flying his Beechcraft Bonanza from Arlington to Colfax when he crashed near Lacrosse.shortly before 2 p.m. Friday, July 1, records show.

Kennedy sustained serious injuries and was airlifted from the crash site to Sacred Heart Hospital in Spokane, according to the Washington State Patrol.

In an unrelated crash outside Lind, in nearby Adams County, cropduster Gavin Morse, 38, of Lind, was killed when his plane went down Saturday, July 2.

Morse's aircraft crashed in a field just north of the 300 block of West Lind-Warden Road, southwest of Lind, records show.

Morse was pronounced dead at the scene.

The Federal Aviation Administration was contacted and is conducting an investigation in conjunction with the Adams County Sheriff's Office.

Here in Whitman County, Kennedy's aircraft (tail No. N55461) went down in a field near a small airstrip close to Milepost 104 of state Highway 26.

Dispatchers received a call about a downed plane about 1:48 p.m.; state patrol troopers arrived at the crash site at about 3 p.m., records show.

"Initially, he was in a lot of pain. He was the one that actually called dispatch," Sgt. Michael Jordan said at the scene. "Due to the engine barely running, he had to put it down.

"He was trying to get to the airport and this [the open field] was the best place for him to land." 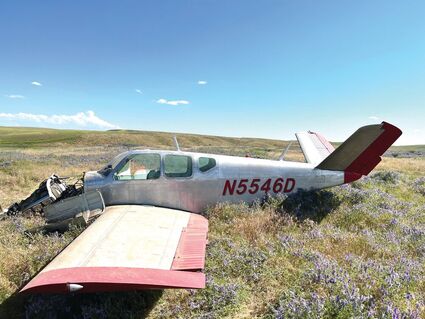 A Beechcraft Bonanza crashed Friday afternoon near state Highway 26 outside of LaCrosse.

"The pilot thought he had seen Highway 26 and thought that's where he was so they started this way and state patrol actually found the plane," said Lacrosse EMT Justin Siebert, noting no other passengers were on board at the time of the crash,

"We do see at least one plane crash a year and most of them are just minor injuries because we have a lot of open fields and safer places to land," Jordan said. "However, its not a paved runway so the damage here is common for most crashes in Whitman County.

"The landing gear is almost always damaged. There is a lot of care that goes into owning an airplane and they are maintained very well."

"The next thing is the FAA investigation," Jordan said. "They will use our information, use our scene photos, and determine what exactly made the plane stop flying."