A mudslide partially covered portions of state Highway 27 from Oakesdale to Latah.

GARFIELD – Heavy rains over the last week brought more than just water, localized flooding and mudslides to the area.

They also may have brought a delay in the harvest season for local farmers.

"The fall-planted grain and winter-planted grain really love the weather," he said. "It's cool and there is plenty of moisture for the wheat.

The lentils and the peas in the eastern part of the county are going to be really late in the season. I looked at mine this morning and they are about 5-6 weeks behind from what they should be," the partner at Jamison Ag Enterprises said.

His comments came after the National Weather Service reported three-quarters of an inche of rainfall at the Pullman-Moscow Regional Airport on Sunday, June 5.

The storm also brought hail to several areas of the county, from Colton in the south to Tekoa in the north.

"There was quite a bit of lightning in the county and we issued two severe thunderstorm warning due to hail," she said.

No records were broken despite flash flooding and mudslides around the region.

Mudslides along the slopes adjacent to state Highway 27 impacted traffic between Oakesdale and Latah, with folks in Tekoa wondering if they could get out.

Because of the weather, Jamison is concerned about future harvest and the expected rain delay.

"Late-stage growth due to hail or flash floods has a negative impact," he said, "If you're one of the farmers that are unfortunate to have any flooding on your farm, it's not going to be good.'

More rain is expected later this week, according to the National Weather Service."

There isn't really anything you can do as a farmer. Unless you're in a field where you can talk to God, you can't really do much," he said. "I hope that people have the capital behind them to support the damage."

Commodity prices are already high at face value for crops.

That's due to inflation and the Russia-Ukraine war.

The inflation rate has to be compensated for the 45% to 50% cost of production, Jamison said.

"I have sympathy for the consumers and especially the retired people on a fixed income. I don't know what they are going to do with their bills," he said.

"I also have sympathy with those in Ukraine and their production being destroyed. That has had a big impact on our prices here in the United States, as well as some of the prices of production."

However, there is a silver lining to the rain.

"We have already improved as far as drought conditions go. In comparison to last summer, we were categorized as an 'exceptional drought,'" Simmons said. "That is the worst rank you can get.

"Today, we have already improved to 'abnormally dry'. This definitely will help with soil moisture." 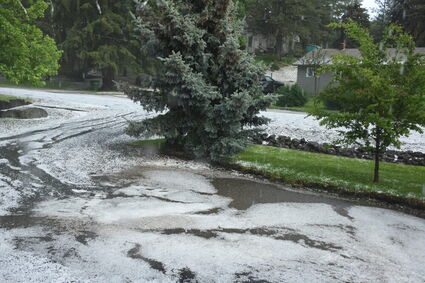 Don Marshall | Special to The Gazette

"Right now, we are in a very moist and cool pattern. We had a really strong area of low pressure that issued all this moisture," the meteorologist said. "We are looking at more precipitation from Friday morning into the weekend and expecting an atmospheric river that will usher in a lot of moisture. An atmospheric river carries water vapor in the sky.

"We get them a lot on the West Coast. They result in a lot of heavy rain."

If she's correct, farmers like Jamison are going to see delays in growing and harvesting certain crops.

"If you're down in the St. John, Washtucna, or LaCrosse areas, harvest may be delayed a little bit but nothing like over here in the eastern part of the county," Jamison noted.