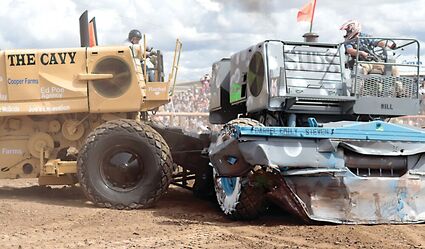 LIND – With names like "General Lee," "Let's Go Branden" and "The Bandit," politics were on full-display Saturday along state Highway 21.

But it wasn't the anti-Biden sentiment that brought thousands of people to town, it was the 33rd annual running of the Lind Combine Derby in the former rodeo grounds.

The Lind Lion's Club puts on the event annually – except for the last two years due to gubernatorial and federal edicts and shutdown orders – to raise funds for local projects.

This year, 15 combine teams entered the derby, and many cars, pickups and grain trucks entered the time trials and head-to-head races that took place Friday and Saturday.

Among the drivers were Tryan Doyle on "The Extinguisher," Derrick Laird on "The Cavy," Bryden Laird on "Pour Life Choices," Branden Aby on Let's Go Branden," Taylor Kerr on "The OSU Enticer," Eric Labes on "Grain Digger" and Cory Dawson on "Butter Face," all from Lind.

William Mann of Sprague drove the Ritzville-based "Suds," Cody Kulm of Cheney drove "The Bandit," and Alika Conley drove Tri-Cities-based "Jaws." Kaiden Schorzman of Odessa was atop the "General Lee."

Due to staffing shortages, the official results were not reported before press time; however, the Lion's Club is expected to post them this week.

After a two-year hiatus, this year's event drew both veteran and newbie competitors.

Lind native Tyran Doyle, now of Pasco, said he "grew up in the sport."

Doyle drove "The Extinguisher" in the event.

"It was always a dream of mine to run in the derby like my dad," he said.

His father, Mike Doyle, retired from derby driving a few years ago and now serves as the derby director for the Lind Lion's.

The younger Doyle said there was never any question that he'd be in the derby.

"It's a hometown event and I grew up in Lind, so, I've always been a part of it," he said, noting this was his fifth year driving.

Over his years of competition, he said he found the key to success is to "keep your rear end and out-maneuver" other drivers.

Tyran Doyle said competing is a time commitment that takes him away from his wife.

"Sometimes she isn't happy, be she knows its my main hobby," he said, noting he's not even sure how many hours he and his pit crew have invested.

"Not sure how many are working ... some were beer drinking," he said. "But you have to have a little fun while you're doing this."

He two is in his fifth year of competing.

"It's fun, especially doing this kind of work and getting all of your buddies here," he said. "I just like the welding and building stuff."

"I guess I'm kind of the returning champ," he said, noting every year is different.

"We find out what's strong and what's not," he added.

LaCrosse's Cody Bennett is in his fourth year competing, this year driving "Fubar."

Most of Bennett's pit crew is from Colfax and LaCrosse, he said, but one member of his team is from Kettle Falls.

"It's always a good time," he said. "My first year, I tied for first. The second year, I got hung up and finished fourth.

But not all drivers have experience to draw from.

Sporting the "Stars and Bars" on the back, Schorzman said this was his first year as a driver.

"I just thought it would be something fun to do," he said. "I've been farming since about the time I could start walking. I just thought I'd give this a whirl."

Schorzman's pit crew comprised mechanics from both Adams and Lincoln counties, he said, noting it took about 48 work hours to get ready.

"We just give it our all and hope for the best," he said.

Another first-time racer, William Mann of Sprague, didn't have time to talk ahead of the derby. 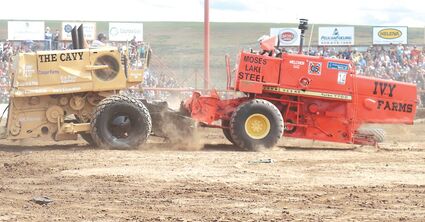 Mann spent the hours prior to derby time trying to reconfigure the rear end of his "Suds" combine.

He and his crew fired up the cutting torches and broke out the sledge hammers to get ready and into the arena.

Meanwhile in the adjacent pit, the crew of "The Bandit" relaxed, broke out a few beers and was ready to go.

The Cheney-based rig of Kulm was under construction at the beginning of May.

"It's been a process," Kulm said, noting he grew up in Lind and moved to Cheney several years ago. "We'll be all right."

Kulm said his pit crew is from the Ritzville, Cheney and other areas.

Despite having an early beer or two, he said his crew will "pull their own weight."