On the trail, when it reins, it pours

Jockeying up for the opportunity to ride with the John Wayne Pioneer Riders and Wagons last week excited me.

I left home early in the morning, encountering the sweet smell of stables, wet fur and dirt. It was a drastic change from what I was used to smelling while in college in the "Motor City."

The rain, however heavy, didn't phase me. That is, until the ground began to flood and I realized I could no longer tell if my Michael Kors rain boots were now filling with water or a mixture of water and horse urine.

The Tekoa campsite where the riders and horses stayed was flooding. That didn't seem to bother Clarence, a wagoneer who has participated in the trail ride across Eastern Washington for more than 40 years.

I was almost ready.

Sloshing through the mud and dirt, I made my way around the mules, leaving at least 6 feet between myself and the Equidae that would later carry us and pull the wagon up and across the refurbished Tekoa Trestle.

The rain continued to come down and as I navigated around the mules I dropped my umbrella in a puddle that I hoped was just water.

I read online to avoid walking behind an unfamiliar mule as they could kick and injure you. The other riders watched and giggled as Clarence said I would be fine behind the mules.

For a 20-year-old who just spent the last two years in Detroit, Mich., the culture shock was intense. I felt like a Martian in a community I had known and somewhat grown up with.

First, I met a mule named "Lucy." I approached with hesitation as the pouring rain came down heavier. She was already dressed in a black bridal and was incredibly calm.

Her brother, "Ricky," waited patiently as Clarence and his shotgun rider John Marsall untangled the bridle to place on him.

Ricky was heterochromic, born with one blue and one brown eye. I had not known heterochromia to be a common genetic mutation in horses. I suppose that's what helped me remember the mules, so well.

Clarence and John got the bridle and equipment attached to Ricky and the mules were led to a bright neon green carriage.

Once the horses were rigged, John came back with dry cloth seats.

Clarence offered me fshotgun and instructed me to step on a small ledge next to the front wheel. I plopped down next to him and cinched my raincoat around my wrists and neck.

I already felt water seep into my coat as I unzipped and zipped my camera under it. I held one hand over my camera, which was already wet, and the other hand held onto the side handle.

John and Clarence's dog hopped into the back and we were off. Surprisingly, the ride felt relatively steady.

The realization that I need to invest in some decent ranch-style clothing sunk in as my blue skinny jeans quickly dampened and were speckled with horse manure and mud.

We rode on a dirt trail, eventually crossed pavement and navigated up a steep hill.

We passed by a Tekoa gas station and a Whitman County Sheriff's Office deputy snuggled in an alleyway. He followed behind us as we crossed state Highway 27 and up Cove Road.

We were met by a number of locals and travelers eager to see the trail riders.

Clarence had been instructed to lead us across the renovated, historic Tekoa Trestle and wait for the grand opening celebration to start. The crowd waved, clapped, and took several photos as we moved across, high over the highway.

I can only imagine how many pictures were taken that show my face stuffed into a tight raincoat with my blonde hair flying all over the place.

Clarence yelled, "Woah," and the mules halted. I hopped off the wagon and a thick layer of muck from the wheel brushed against my jeans. I unlocked the gate and Clarence brought the horses to another halt.

John climbed down as I climbed on to the wagon. John unlocked the next gate as the gate was very close to the trestle. The height spooked Ricky and Lucy.

We passed through the narrow opening and John pulled himself onto the back. Ricky and Lucy were incredibly nervous crossing the trestle at such a height.

Aside from films, I had never heard a person yell forward commands to a horse or mule. For a moment, it felt like I was in a Western film. When we got to the other side of the trestle again, the mules calmed and stopped.

Navigating through the next few gates, Clarence was surprised to see we were the first to cross. Stepping off the wagon I wandered through thick wet grass up to my waist.

Other horses and riders began to arrive.

I pulled my camera out and similar to my photographer parents, I began snapping pictures of everything and anything.

As a kid, I somewhat resented the constant camera pointed at me. But at the moment, and even now while writing this, I think of my Mom. My camera ended up allowing me to encapsulate the cold, wet and fun parts of this journey.

As I sat back into my seat, it didn't feel dry. In fact, I remember hearing a slosh as I sat into the soaked cloth seat.

As the excitement climaxed, we were finally able to cross over trestle, signifying the opening of the trestle. A monumental moment in the crossing was Clarence tipping his cowboy hat and spilling water across my lap.

Halted once again, we awaited the grand ribbon-cutting ceremony and crossed through the crowd of iPhones and umbrellas. 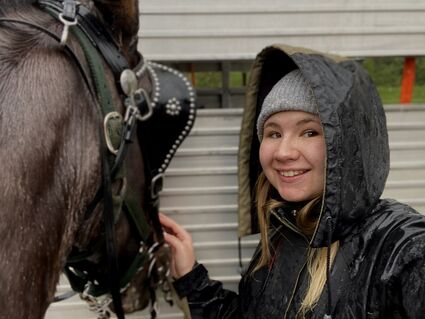 The end of the trip took us down the hill. Clarence yelled more unfamiliar commands to slow us down as we trotted down the incline and across the highway.

When we arrived back at camp, I only dreamed of warm sweatpants and a cappuccino. I parted ways from my new friends eager to perhaps ride with them again.

The experience reminded me of the simple and beautiful parts of my Tunk Valley upbringing.

I longed for mountain life while trapped in Detroit but nearly forgot about my family's ties to farming and the great outdoorsy adventures I once shared with a horse named "Chip."

At the end of the day, a concrete jungle is nothing compared to manure, stained skinny jeans and Michael Kor rain boots.

- Olivia Harnack is a reporting intern at the Whitman County Gazette. Email her at [email protected]