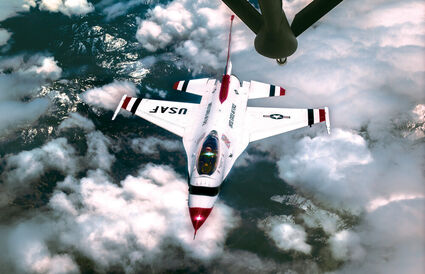 As a young lady in her infancy of writing news here in Colfax, and who is in the process of enlisting in the U.S. Army, my experience while flying with the Thunderbirds last Thursday in advance of Skyfest was unimaginable.

A caravan of press arrived at Fairchild Air Force Base on Thursday, May 12.

The 0700 - that's 7 a.m. in military time - arrival riddled me with excitement, despite the lack of coffee fueling my usual caffeine addiction. I shook with excitement and chill as the wind blew past all of us.

Two Air Force representatives met with us outside and we were taken through the gate and led to a briefing room. In the briefing room, I sat next to a filmmaker from England and a publisher for a Pacific Northwest magazine.

I have never felt imposter syndrome so strong in my life as a dorky and uncoordinated 20-year-old while surrounded by much-older individuals much older and representing magazines, other newspapers and news outlets.

Squirming in my seat, I recognized how lucky I was to have this opportunity and how proud I was to be there. A presentation was cast to the wall in front of us and a briefing of the mission rolled by.

I will soon not be a stranger to briefing missions, but I couldn't help but feel the excitement of seeing my first briefing presentation. In fact, I felt this awe-inspiring feeling nearly the entire day.

As an easily impressionable kid, I wandered through the halls and noted every detail to the military photos that scattered across the walls in the hallways as we navigated downstairs to the gate. We went through security and at the gate a large group of specially selected individuals were set to ride in a separate plane to experience the refueling flight as a reward for their hard work. However stoic and still they sat, I could see that they were equally as excited.

Our bus eventually arrived and we left the terminal.

We drove past what felt like an exhibit of aircrafts until the bus stopped at a KC135, a large airtanker. We collected "B-roll" video and photos of the area until the boom operators of our flight had our seats ready.

I quickly moved to the front of line and was the first to board the aircraft.

Walking onto the aircraft was an entirely different feeling of its own. As a child, I often imagined what it would be like to sit in those cargo seats seen in every military action film on the big screen.

But, as an inside joke, they were more "comfortable" than airline seats. And the "first-class seating" came with unlimited legroom, ideal for tall individuals such as myself.

The stairs were removed and the ladder lifted as we soon left for take off. Take off was incredibly smooth. However, a TV station reporter did not account for the pressure and a tripod went AWOL as it slid down the aircraft stopping at the end of a seating row.

We flew east from Fairchild Air Force Base to Idaho, then navigated south until hitting Nevada. Somewhere in Nevada, my eyes closed for a quick cat nap.

During that time the Thunderbirds caught up to us for a standard refueling flight.

I wandered the cabin, met the pilots, and took pictures outside the small side windows. Eventually, it was my turn to get my pictures of the planned aerial refueling of the fighter jets.

I was led down a small step in the aircraft and instructed to lay down on a large blue pad. I laid there on my belly with my Canon M50 while the boom operator, who was one year older than me, guided the mechanism while 25,000 feet in the air.

My shutter speed was at the fastest setting I could get it in. However, my view seemed to be slightly obstructed so the boom operator offered to help and he allowed me to re-position and switch sides to get better photos.

Unfortunately, due to a mechanical issue, the refueling exercise was cut short.

I snapped dozens of photos and quickly climbed out for the next person to get their photos. Before leaving the mechanism, I snapped a couple pictures of the charming boom operator.

Before sitting back down, I wandered around a bit more and took more photos.

To look outside an aircraft window and make eye contact with a fighter jet pilot is an incredible moment that I hope to experience again. Well, experience again but here's to me hoping that I will be making eye-contact to someone in a refueling jet while I ride in a fighter jet.

We crossed into Idaho, again, and navigated back to Fairchild. I counted five beeps indicating a drop in altitude. As we continued lowering, I could feel the roller coaster-like butterflies flutter in my stomach while I held onto the seat during some brief turbulence. 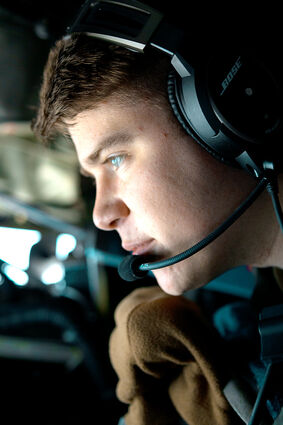 After we landed and stepped off the aircraft, I felt eager to start my journey in the military.

For the last few weeks, I had begun to question my choice to enlist. It has been a lengthy process due to college, work and other scheduling issues. I have been in the process of enlisting for roughly six months, now.

After spending a day with the men and women of Fairchild Air Force Base, I realized that despite however long it takes, it'll be worth it.

The brotherhood, lighthearted fun and the thrill of adventure, created a welcoming and exciting atmosphere that I can't wait to join.

- Olivia Harnack is a reporting intern with the Whitman County Gazette. Email her at [email protected]