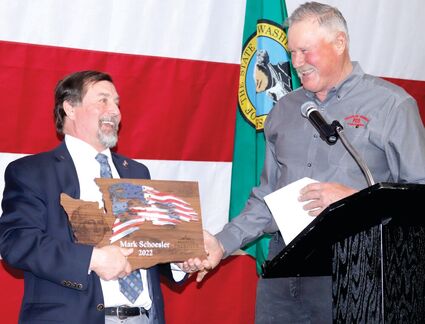 It was the third award of the week presented to the Ritzville Republican representing the 9th Legislative District, which includes Adams, Franklin, Whitman, Southern Spokane and other counties.

In addition to the True Patriot award, Schoesler received the Legislator of the Year award from the Hunters Heritage Council and a golden hammer from Habitat for Humanity.

During the Lincoln Day Dinner, Schoesler was speaking about the legislative session when he was surprised by Chairman Clint Didier, who presented him the award.

"We have a True Patriot," Didier said, handing the plaque to Schoesler amid a thunderous applause.

The award was presented to Schoesler for his fight to upend over-reaching gubernatorial emergency powers, prevent the sexualization of the educational restriction, hold the line on taxes and represent the traditions, customs and values of Eastern Washington in the Legislature.

The award was the culmination of a week in which he received two other awards.

Hunters Heritage Council president Mark Pidgeon presented him the Legislator of the year award for his work to defend the rights of hunters and firearms owners.

"I'm honored and pleased," Schoesler said of the award. "Hunting has been a big part of my life since I was a boy, and I know that many people across the state enjoy hunting.

"Unfortunately, it seems that state government creates more hurdles for hunters, which is why I work hard in the Legislature to protect hunting in Washington and will continue to do so."

That award was presented during a Pullman Chamber of Commerce breakfast.

"Affordable housing has become a serious problem in many communities across Washington, and I'm glad that this year's capital budget passed by the Legislature provides funding for Habitat for Humanity to help address housing needs in our state," Schoesler said.