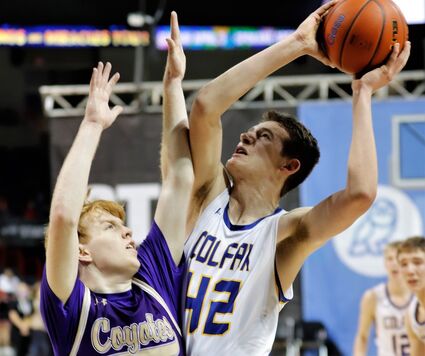 But Colfax put on a scoring clinic posting 35 points more than the Coyotes to win the game for the state 2B fourth-place trophy.

The Coyotes fell, 80-45, and are coming home with a sixth-place finish.

John Lustig led all scorers with 34 points for Colfax, followed by teammate Damian Demler with 31.

The Coyotes top scorer was Quincy Scott with 10 points. Michael Lenke added 9 and Elijah Kinsey 8 in the loss.

For Colfax, Lustig also led in total rebounds, 11. For Columbia, Lenke had 8.

Colfax jumped out to a 22-8 first quarter lead, but the Coyotes closed the margin in second quarter. At the half, Colfax had a 37-26 lead.

A big third quarter advanced the Colfax lead, as the Bulldogs outscored the Coyotes, 25-9.

Entering the fourth, Colfax had an insurmountable 62-35 lead.

As the clock ticked down, the Bulldogs pulled the starting lineup and the bench heated up the court for the last 5 minutes.