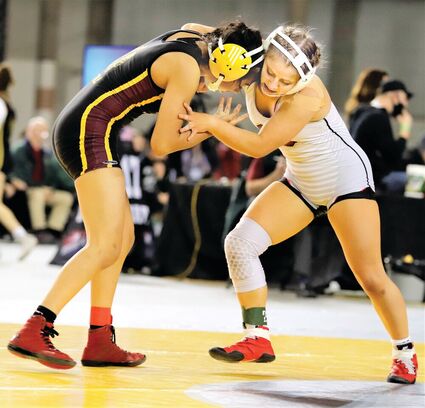 Alexis Monday grabbed silver for the Huskies at girls 115 pounds, the highest of any Adams County wrestlers.

She opened with a bye, then pinned Lafediya Eldridge of Tahoma in 3:48. In the quarterfinals she won a 3-1 decision over Kendra Perez of Toppenish, before edging Brooklyn Jones of Orting, 2-1, in the semifinals.

In the championship bout, she lost to Ashley Dayana Narango of Moses Lake, 6-0, to finish second.

For the Othello boys, Campos won his state-opener by tech fall in 4:58 over Cayden Beauregard of Sequim, 16-0. He then won a 6-1 decsiion over Talatheon Warness of Aberdeen.

He lost his semifinal bout to Alan Salguero Jr. of Orting, 8-1, before winning a 4-2 decision over Jordan McKamey of Clarkston in the wrestlebacks.

In his match for third place, he defeated Warness again, 6-0, for bronze.

Meanwhile at the same weight, teammate DeLa Cruz opened with a 10-5 victory over Daniel Herrera of Washington and then pinned Brody Davis of Washougal in 1:45.

He lost his semifinal bout to Chris Lopez Gonzales of Burlington-Edison, 16-0, a technical fall that ended at 4:48. He then lost to Warness, 15-7.

Adams County's last medalist, Zuniga, opened with a 9-3 loss to Michael Hatton of Aberdeen at 113 pounds.

Dropping immediately to the wrestlebacks, he then pinned Michael Lewis of Burlington-Edison in 2:57, Damian hernandez in 41 seconds and Koehn Greenough of Sedro Woolley in 2:52.

In a rematch with Hatton, he lost 11-6 to drop to the medal match for fifth.

He won that match, 7-1, over Gavin McCloy of Pullman.

Other Huskies competing in the state tournament, but not placing, included girl grapplers Hazel Gonzalez at 125 and Thalia Gallegos at 170.