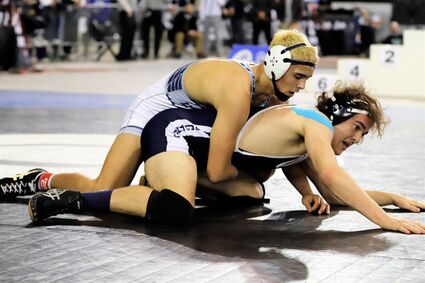 The Riverhawks amassed 166.5 points, beating Sunnyside, 149 points, for the title. South Kitsap was third with 109.

The Riverhawks had eight medalists.

Daeton Johnson earned a silver medal at 113 and local bronze medalists included Lance Stover at 145 and Judah Bishop at 170.

Other medalists included Davian Martinez, sixth at 126; and Jordan Tobias, fifth at 132.

Riverhawks competing, but not placing, include Anthony Pina at 106, Por Htoo at 120, Hunter Taylor and Mason Tovar at 152, and Kaden Beck at 160.

The championship bout at 113 pounds pitted Chiawana teammates Medina and Daeton Johnson against each other.

Medina reached the title match by pinning Erik Morales Toro of Graham-Kapowsin in 3:35 and then winning a major decision over Zach Baker of Issaquah, 15-4, and Jesus Alcala of Davis, 10-1.

Daeton Johnson reached the bout by pinning Caleb Cuevas of Bethel in 1:44 and Ulysses Lopez-Vazquez of Glacier Peak in 2:37. He then won a major decision over Noah Koyama of Union, 13-4.

In the title bout, Medina won gold with a 6-1 decision over Daeton Johnson.

Darion Johnson reached the 182-pound championship by pinning Lorenzo Gunn of Skyview in 3:48 and then winning a technical fall in 3:47 over Frank Kissick of Mount Si (the score was 16-0).

In the semifinals, he won a 5-1 decision over Phillip Chobot of South Kitsap. And in the championship, he defeated Michael Ager of Rogers (Puyallup), 7-1, to bring home gold.

At 195 pounds, Anderson reached opened state by pinning Jayvon Garcia of Woodinville in 55 seconds, Ronell Parker-Borerro of Graham-Kapowsin in 1:38 and then Caleb Braswell of West Valley (Yakima) in 2:59.

He won the title match by pinning Jose Flores of Kennedy Catholic in 1:16.

Stover earned bronze at 145 pounds by winning decisions over Gunnar Henderson of Battle Ground, 4-3, and then Karandeep Chauhan of Kentwood, 4-2.

In the semifinals, he lost a 10-4 decision to E.J. Villanueva of Sunnyside.

In his first wrestleback bout, he edged Henderson again, this time, 4-1, to advance to the match for third place, which he won in a narrow 2-1 decision over Markus Almaguer of Sunnyside.

Chiawana's other bronze medalist, Bishop, opened by pinning David Long of Decatur in 31 seconds, then by pinning Jesse Ramey of Central Valley (Spokane Valley) in 5;09.

He was pinned in 3:55 by Chirstopher Neal of Tahoma in the semifinals, sending him to the consolation round.

In his wrestleback bout, he pinned Tyler Schuyleman of Wenatchee in 48 seconds to move the the third-place bout, which he won by pin in 1:29 over Terry Smith of Curtis.

Tobias won his fifth-place medal at 132 pounds after opening with major decisions in a 11-2 win over William Gomez of Skyview and a 14-2 win over Cyrus Comia of Tahoma.

He lost in the semifinals, 7-6, to Kai Calhoun of Graham-Kapowsin, and then lost his first consolation match, 8-5, to Jesus Manzo of Pasco.

In the bout for fifth-place, he pinned Vincent Nabors of South Kitsap in 3:24.

At 126, Martinez opened with a major decision, 11-4, over Jaden Jennings of Lake Stevens, and then a 4-0 decision over Chase Eaglin of South Kitsap.

He lost his semifinal bout, by technical fall in 4:16 to Mitchell Neiner of South Kitsap - the score was 19-3. He then lost a wrestleback by major decision to Nathan Curry of Tahoma, 10-2.

In the match for fifth-place, he lost 5-2 to Victor Godinez of Pasco to finish sixth.

In other Chiawana matches:

106 - Pina lost to Jacob Christianson of Lake Stevens, 11-5; pinned Hayden Goldsmith of Summer in 1:52; and then was eliminated by Curtis Carlisle of Rogers (Puyallup), 6-0.