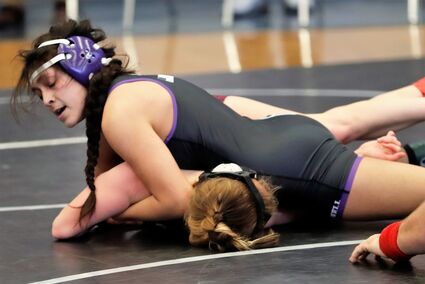 CONNELL – One local girl is headed to the state Mat Classic wrestling tournament this Friday.

Coronado will open state with a match against Kaliana Bill of Burlington on Friday morning in the Tacoma Dome.

She is one of two Connell Eagles to compete in the tournament; Jocelyn Morales Flores did not place at her weight class.

In her opening match, she pinned Kharma DeWolf of Innovation in 36 seconds and then lost by pin to Royal's Emma Villa, who pinned her in 51 seconds.

In the consolation bracket, she then pinned two competitors in a row – Skylar Thonrton of Rogers (Spokane) in 38 seconds and Aaliyah Gomez of Othello in 11 seconds – before topping Shealynn Spino of Eisenhower in a 10-4 decision.

That propelled Coronado into the bout for third place, which she lost by an 11-7 decision to Viktoria Dovhoruka of Rogers (Spokane) to finish fourth, good enough for a state berth.

Flores won her opening match by pinning Vaea LaMoureaux of Reardan in 3:24, but then was pinned by Ashley Dayana Naranjo of Moses Lake in 2:41.

She lost her last match to Jada Hernandez of Warding, 8-0, and was eliminated from the post-season.