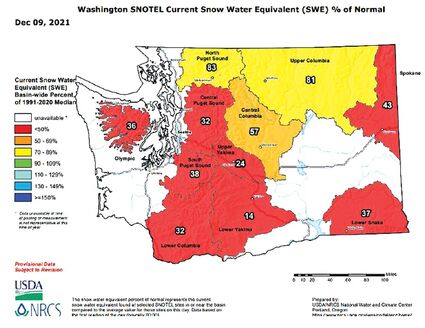 WASHINGTON – The National Weather Service released a report in December breaking down the moisture and drought information for the entire Inland Northwest.

According to the report, drought conditions have shown small improvements throughout the month of December across the Inland Northwes,t especially in Southeast Washington and the southern Idaho Panhandle.

These improvements were reported because the areas in the state that were experiencing exceptional and extreme drought have seen improvement.

These improvements came about because of a wet fall and winter – there has been a much larger amount of rain fall, the report said.

Drought levels are measured through soil moisture levels and stream/river flows which have both seen increases in the month of December.

Stream flows throughout the Inland Northwest have seen improvements since record lows this last summer, the report shows 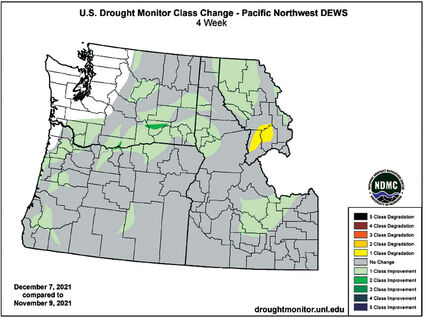 North-Central Washington is experiencing above normal flows while parts of the Columbia Basin, Palouse, Spokane, and the lower Snake River basins are all still experiencing lower-than-normal stream flows, the report shows.

While rain levels have been high, the snowpack has been slow to mount even after some early snows in October.

However, there has been a fair amount of snowfall in the last half of December which could have impacted the snowpack levels positively going into 2022.

This will undoubtedly improve the already positive outcomes for the Inland Northwest's water supply outcomes, the report said.

Residents of the Inland Northwest can also expect colder-than-normal temperatures going into next year and the high levels of precipitation to continue going into the new year.