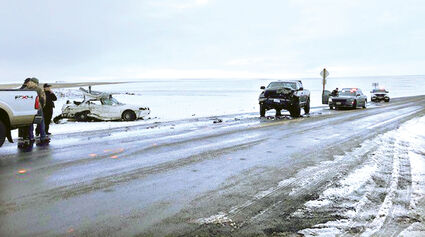 RALSTON – An Washtucna teenager has died from injuries he sustained in a crash Wednesday, Dec. 22, on state Highway 261.

The crash occurred around 1:50 p.m., about 9 miles south of Ritzville, the patrol reported, noting the two vehicle collision was near Milepost 53 of Highway 261, south of Ralston.

According to the patrol, Zupan was northbound in a 2006 Buick LaCrosse sedan when he failed to negotiate a curve, crossed the centerline and collided with a 2008 Toyota Tundra pickup driven by 19-year-old Kurtis W. Klein of Edwall.

According to the patrol, the cause of the crash was speed and driving too fast for conditions.

It is not known if drugs or alcohol were involved in the crash, the patrol reported.