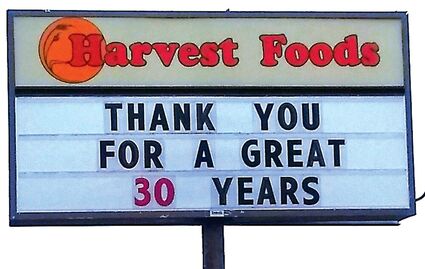 RITZVILLE – Operating as Akins Fresh Market, John Akins and his Quincy-based Akins and Co. have acquired the local grocery store.

The sale documents for the building erected in 1957 were filed Oct. 29.

Details on the costs to acquire the business, its inventory and licenses ere not released.

At 38 years old, he is the grandson of Arlis Akins, who founded the grocery store chain in 1963.

There will be new decor, cold cases, freezer cases and signage, he said.

A variance has already been granted for the sign on First Street and Akins expects the new sign to be installed "in about a month."

Another change will be the absence of print ads in mailboxes.

On social media, Akins Fresh Market said, "We do not print (ads) anymore. The way we buy and get deals we often change our ad the morning of publication.

"A welcome bonus of this is (Akins) takes the budget dollars spent on ad printing and (now use the savings) to buy down goods for deals. We do print a large format that we hang in store and we are working on a solution to do a small run of printed papers for people to look at while they shop."

During a normal week, Akins will post its weekly specials to its website at 8-9 a.m. Wednesday mornings, he said.

Akins Fresh Market and Harvest Foods use the same wholesaler, and store brands will not change.

However, Akins said there would be "different variety."

There is a new produce supplier and additional sources of meat will also be arriving in store, he said.

According to Akins, all former employees who applied, "around 9 people," have been hired by Akins Fresh Market.

The store is still looking for another 5-7 employees, he said.

Asked why Akins came to Ritzville, Akins said, "We like small towns;we have a lot to offer."

Earlier this year Akins Fresh Market was named Retailer of the Year by the Washington Food Industry Association.

The award was presented April 6 at the Akins Fresh Market in Quincy.

Akins was founded in 1963 by Arlis Akins in Quincy.

There were stores in Moses Lake and Othello, but were closed due to competition from Walmart.

Ritzville Harvest Foods, formerly Nauditt's Thrift, was owned by the Adams and managed by daughter and son-in-law, Kim and Clay Cousins of Ritzville.

In the early 1990s, the Adams also owned an Empire Foods store in the Trader's Block building at 202 W. Main. St.