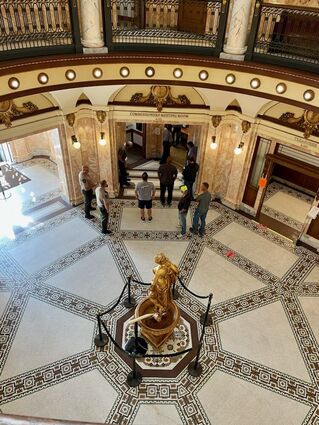 Speakers spilled out into the rotunda of the Franklin County Courthouse this morning as others called for meetings to continue without masks.

PASCO - A Franklin County commissioner stormed out of this morning's meeting, calling the session "illegal" because another commissioner and most of the audience appeared without masks.

The raucous behavior came a day after Gov. Jay Inslee's newest Wuhan coronavirus edict went into effect requiring everyone, vaccinated or not, to wear masks in public indoor venues.

Commissioner Lowell "Brad" Peck set the stage for his walkout almost immediately after the meeting was called into session by Chairman Clint Didier.

"Mr. Chairman, I guess it falls to me, once again, to point out that you are conducting yourself in a manner that is not only inappropriate, but unlawful," Peck said as Didier was trying to get the underway.

The masked Peck did not have permission from the chairman to speak at that time.

"I have the floor," Peck shouted.

"You are not the chairman, Commissioner Peck," unmasked Didier responded.

Peck called for a point of order, granted by Didier.

Under Roberts Rules of Order, a "point of order" is procedural in nature; it does not allow one member to personally attack another.

But with Commissioner Rocky Mullen's consent, the meeting continued.

Mullen initially wore a mask during the meeting, but received a loud round of applause when he later lowered it.

"Well, I'm not going to participate in an unlawful meeting where you incite others to violate the law."

Peck was referring to Didier and a video he posted to social media encouraging residents to go about their lives as they see fit - with or without masks and with or without coronavirus vaccinations.

"I'm not inciting others; it's their free will," Didier replied.

The chairman opened the floor for Mullen to speak.

Mullen acknowledged the meeting could be illegal, but also said he wanted to hear from the standing-room only crowd that had spilled over into the rotunda outside the meeting room.

Franklin County Prosecuting Attorney Sean Sant, too, acknowledged the county could be challenged if the meeting continued, noting that there is state and national emergency declared, and that the Legislature gave Gov. Jay Inslee sole decision-making authority under emergency conditions.

Sant likened a decision to continue the meeting sans masks to " basically Creating a CHAZ zone in our county."

("CHAZ" is the accronym for the so-called Capital Hill Occupied Protest - later renamed the Capitol Hill Autonomous Zone - in which Antifa and Black Lives Matter rioters took over a portion of Seattle last year, forcing police to abandon the district for months.)

"No, we're creating a sanctuary county," Didier replied. "We're going to uphold our sanctuary with this out-of-control tyrant we have in the governor's office. Our inalienable rights were given to us by God, not a government, not a president and not a governor."

Didier asked the audience if they would don a mask or leave so the meeting could be conducted.

The crowd's reply was a resounding no.

Franklin County Sheriff Jim Raymond suggested allowing the public to speak, if commissioners would allow it.

Both commissioners Didier and Mullen said they would listen to those who came to speak out.

"The meeting is already unlawful," he said. "I'm not going to participate in an unlawful meeting... I'm going to excuse myself."

Peck then left the meeting.

Pasco resident George Dockstader took time to chastise all of the commissioners for not managing the business of the county.

"You guys need to do your business for the county or resign and get the hell out."

Simmons, who said he favors a mask, was at the meeting to voice his opposition to non-local mandates.

"The problem is we're constantly told to be quiet," he said. "What we want is to fight these mandates.

Simmons said the Legislature needs to revoke any authority given to the governor.

Rep. Brad Klippert, R-Kennewick, was in the audience.

He addressed the issue, noting that as an 8th Legislative District representative, he has tried to limit gubernatorial emergency powers to a maximum of 30 days, to no avail.

He said he's also trying to get enough legislative support to call an emergency session, but is being blocked by Speaker of the House Laurie Jinkins, D-Tacoma, and Senate Majority Leader Andy Billig, D-Spokane.

Klippert apologized for being one of the lawmakers who voted to give the governor extensive emergency powers.

Had he known the governor would abuse the authority by extending the definition of emergency to include a viral outbreak, he would not have voted for it.

"We were thinking landslides, snow, floods, that type of thing," he said.

Resident Trevor O'Dell said he was there to stand up for the rights of local residents.

"We're standing here with our bill of rights being whittled away, little by little," he said, noting he's tired of being told where he can go, where he can shop, where he can work and more.

Franklin County Assessor John Rosenau also took a turn at the microphone, voicing support for the individual right to choose whether they want to wear a mask.

Rosenau also noted the impact the governor's edicts may have on employers, including his office.

According to Rosenau, many employees in the Assessor's Office will quit before being forced to get a shot.

"I cannot afford to lose employees," he said, noting that as an employer he doesn't want to know a workers medical history (such as vaccination status).

The conversation turned back to Commissioner Peck, who last week took to the radio to advocate for vaccinations.

Chairman Didier pointed out that Peck's appearance on the radio only represented his personal view, not that of Franklin County commissioners or the county as a whole.

The meeting returned to input on what should be done to counter the governor's mandates, as well as whether or not commissioners could conduct the county's business.

Rather than continue too much longer, Commissioner Mullen suggested the meeting be in recess until next week.

Hearing that, Didier called the session into recess.