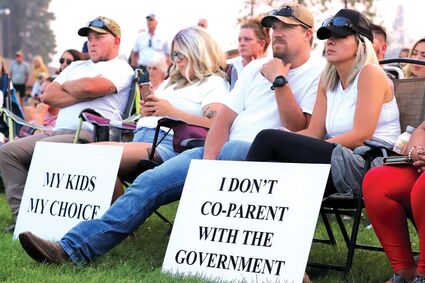 A World War II-era P-51 fighter flew overhead, piloted by Jared Segebartt of Moscow, Idaho, as the "Stars and Stripes" waved in the wind.

Some in the crowd waved American flags; others hoisted signs demanding the governor rescind his edict requiring public school students to be masked when classes resume in the coming weeks.

On the dais, 9th Legislative District Republican lawmakers Sen. Mark Schoesler of Ritzville, Reps. Joe Schmick of Colfax and Mary Dye of Pomeroy; and Lewiston businessman and freedom activist Gary Peters encouraged parents, teachers and residents to stand up for the youth in their community.

The lawmakers represent Franklin County, including the city of Pasco.

Parents, teachers and others came from as far away as Pomeroy, Ellensburg, Othello, Moses Lake, Okanogan and Reardan to demand an end to the student mask mandate.

Sheri Bartels of Spangle, one of the organizers of the event, called on the crowed to "stop this freight train" coming out of Olympia.

"We came here for one common goal - that is to take back our schools," she said, calling mandates from the Governor's Office and the state Office of the Superintendent of Public Instruction a "six-headed monster."

The order to put face coverings on public school students returning to campus in the coming weeks is just the tip of the iceberg of illegal and inappropriate mandates from state agencies in violation of the state Constitution, she said.

"The school boards, they are not in charge anymore," she said, noting most rubber stamp recommendations directed by Superintendent of Public Schools Chris Reykdal or Gov. Jay Inslee.

Bartels said threats to school districts to obey the mask mandate or lose funding is "extortion," and a violation of the state constitution.

It may also be a violation of the state Supreme Court's McCleary Decision, which said the state has a constitutional duty under Article IX Section 1 to "make ample provision for the educate all children" living in the state.

Bartels reminded the crowd that the constitution grants jurisdiction to local boards, not a health district employee, over schools.

"I don't remember electing anyone from the health department," she said, calling on parents to resist mask mandates.

Peters, too, called on parents and teachers to openly oppose the illegal mandates.

A native of Pomeroy, he said parents are not just facing one battle, but a war for control of their children's education.

"This is not going away," he said. "You are all the grass roots movement; it starts right here."

And it won't be easy to win.

"You want to get these politicians to pay attention, you have to hammer them. You blow their phones up," he said, calling on event-goers to be prepared.

"You're going to be attacked," he said.

Amy Swannack of Lamont said the attacks have already begun, even at the local school and university level.

Swannack said her daughter, a recent graduate, is enrolled in a university out-of-state.

"I was not going to pay for a school that was going to force medications," she said, noting she's also pulled a younger child out of St. John High School because of mask mandates.

As a homeschool student, under state law, Swannack's son is allowed to play sports in the local public school district.

Swannack said her son, a basketball standout in St. John, will be playing for the Eagles' without a mask.

"My child will be on the team; he will not be wearing a mask," she said.

Rep. Dye commended her passion, and suggested she get an "army" of parents "willing to blow it up."

"We have healthy kids out here," Rep. Dye said. "Push back."

He blasted Gov. Inslee and Reykdal for only allowing a "one-sided" discussion of masks in schools.

Taking a turn on the microphone, former Liberty School Board member Gail Liberty said neither Reykdal nor Gov. Inslee have any right to threaten parents with taking school funding away.

"Don't give us threats of defunding our schools," she said. "Don't you dare."

Liberty questioned if the Legislature was looking into the legality of the threats or actual defunding.

Rep. Schmick said the Republic caucus has attorneys looking into it.

He also pointed out that even if it is illegal, Gov. Inslee appointed many of the judges in the state, the same judges who would be asked to decide if the governor and/or Reykdal violated the state Constitution and state law.

Sen. Schoesler, however, said parents shouldn't worry about that.

He said parents should use the litigation tool to keep pressure on Olympia.

"You have to be prepared to lose the first round and appeal," Rep. Dye added. "But this is our time to take back our schools."

To eliminate mask mandates, she said parents need to "get all the school boards together and say we're not doing it."

Natalie Voigt of Fairfield said students, too, need to get involved.

"What if kids show up without a mask," she said.

Rep. Schmick said the state would likely take it out on parents by attempting to fine school district that don't enforce the mask requirement.

When teachers and students wear masks, you can't read expressions, demonstrate enunciation or even hear pronunciation.

"This whole thing is about control, not health or safety," the teacher said. "It's an issue of choice."

Tharp said she could lose her job for not enforcing a mask order, or possibly refusing a vaccination.

"He's (Gov. Jay Inslee) the selfish one for making a choice for me," she said. "I don't want to risk my freedoms or my life because someone else says that they know better."

While the lawmakers appeared receptive to the concerns of protesters, some members of the crowd challenged them to stand up for parents who choose not to mask their children. 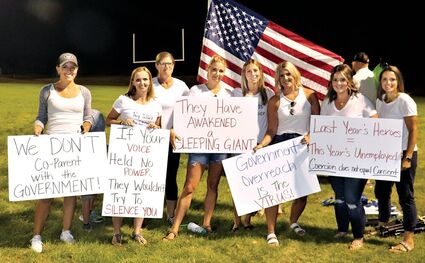 Several parents from Colfax and Pullman pause for a photo Thursday, Aug. 12, at the end of a protest at Liberty (Spangle) High School over Gov. Jay Inslee's orders to require students to wear masks on public school campuses.

Some also challenged them to stand up for school workers who refuse masks and will likely refuse any mandatory vaccine.

"Are you going to protect staff who take a stand," a woman who identified herself only as Angie of Lamont" asked.

It's too late for some longtime public school employees, Ron Cockle said.

Cockle drives a school bus in the Liberty district.

"I haven't heard one thing that is helping us," protester Joel Wagner added.

Unless lawmakers stand up, parents will have no choice but to pull their children out of public schools, Wagner said. 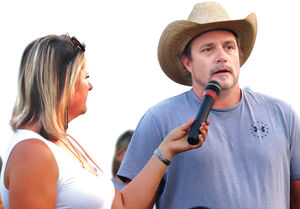 OTHELLO — The parental uprising over masking students is spreading to Adams County.

The protest is an outgrowth of a protest last Thursday in Spangle, in which more than 450 people turned out to oppose the governor’s order. That event was organized by several parents in Spokane and Whitman Counties.

Othello City Councilman Jon Erickson was in attendance at the protest against masking.

He also took issue with state Superintendent of Public Instruction Chris Reykdal’s efforts to force all public school employees to get an experimental Wuhan coronavirus vaccination.

“Shame on you Chris Reykdal,” he said. “The pubic has lost trust in you.”

Washington Community Coalition for Change in Schools organizer Mandi Love-Keen said parents are trying to “connect and gain momentum with our movement to bring local control back to schools” through social media to bring more protests across the state.

some schools i.e. Seattle community, Bellevue, now are requiring vaccination for any student registering for an on-line class - even if you don't step foot on campus. Dictator administrators need to be ousted. Can't defund schools unless people stop voting for the useless levies that support schools. Schools get more than than share from State Forest Trust Land and Lotteries.