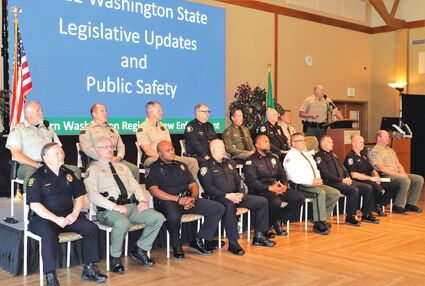 SPOKANE VALLEY - Leading law enforcement officers from across Eastern Washington are warning residents that new laws will make it difficult to serve the public on possible criminal activities.

"The Legislature of the state of Washington chose to craft laws and did not invite your law enforcement leaders to the table to even discuss these," Spokane County Sheriff Ozzie Knezovich said. "This is about as clear as mud."

Knezovich said the Legislature ordered the laws be changed now, with training to follow after implementation.

"They did it backwards, folks," he said. "Then they want to claim we don't understand."

The changes weren't necessary, Knezovich said, calling the changes an emotional reaction to incidents that happened across the country last year, but not here.

"This law has been driven completely by misinformation and emotion," he said, referencing bills 1310 1054.

According to Knezovich, the law effectively eliminates the agencies' use of shotguns and launchers (which are used for bean bags and other non-lethal deterrent delivery).

"What you have left us with is lethal means only," he said. "Your own AG (attorney general) said you need to do this.

Knezovich said the Legislature reacted to false allegations from activists suggesting without proof that law enforcement shows up with machine guns and other military equipment.

"Activists and activist politicians of the state want you to believe is all we do is go in and escalate," he said.

The changes mean police may not be allowed to go to calls regarding someone who is having a mental health crisis and being disruptive, but not breaking any laws.

Adams County Sheriff Dale Wagner took time to explain the impact on rural agencies that cover a "lot of miles without a lot of resources."

"This legislation didn't take any of this into account," he said, noting his deputies are often responding alone.

"Our calls happen rapidly for us," he said. "we're out there by ourselves a lot."

But, he said, the new law means that deputies won't be allowed to remain on-scene if a crime is not imminent.

"We're going to do whatever we can," he said, adding that may not be enough because the Legislature has tied law enforcement hands.

Calling the new laws "demoralizing," he said, "This isn't what they signed up for."

Like Wagner, Maycumber's deputies are often first on-scene for a call in his rural county.

Deputies find solutions, he said, when they arrive.

"Those solutions are being taken away from us," he said.

Maycumber recounted a recent mental health-related incident in which deputies used force to restrain an individual until family and medical personal could interview.

Under the new laws on restraint, "we wouldn't have been able to use force to detain him long enough," he said, adding that he believes the incident would've ended very differently had it occurred after July 25.

He noted that under the new laws, officers may not even be allowed to respond to similar incidents.

Spokane Police Chief Craig Meidl said, he too is concerned about the inability of officers to use the tools they need to de-escalate incidents that may or may not be criminal in nature.

He called the laws ambiguous, specifically pointing to language requiring "the least amount of physical force necessary" for a resolution.

"An arm bar, leg sweep or Taser... anyone of those tools would be reasonable," he said. "But which one is least?"

He also pointed to language that essentially prohibits law enforcement from detaining anyone at the scene of a crime without having established probable cause first.

Sometimes, "You need to use reasonable force to prevent people from fleeing," he said.

Probable cause comes only after officers have some time to investigate an incident he said, noting that now officers cannot compel anyone to remain on-scene while they initiate an investigation.

If probable cause isn't established within minutes, officers are now required to let potential suspects leave and will have to use the warrant process to capture them at a later date.

The same thing applies to someone in a mental health crisis, he said, noting they cannot detain them, either.

"If there is no crime that is imminent, officers are required to leave," he said.

The group is calling on all residents to notify their legislative representatives that the new laws will cause an erosion of law and order.

They also asked residents to urge the laws to be change or rescinded.