Declaration includes burn ban on agricultural, camp and other fires 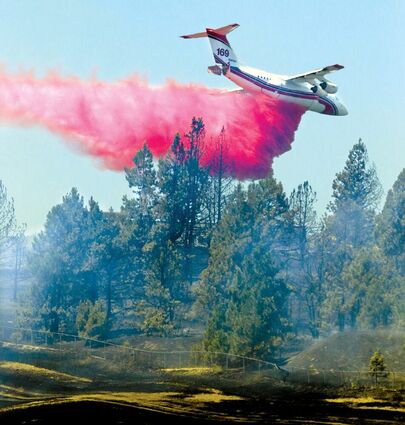 A fire bomber drops retardant on the Andrus Fire north of Cheney on Monday, July 5. The fire remained uncontained Tuesday.

OLYMPIA - Gov. Jay Inslee today, July 6, declared a statewide state of emergency relating to the growing risk of wildfires, including a statewide prohibition on most outdoor and agricultural burning through Sept. 30.

The ban includes camp, agriculutral and other fires, but not gas grills or contained fire pits on private property.

"Washington is facing a historic drought and we have already experienced record-breaking heat. We must be vigilant in our efforts to prevent wildfires, and the loss of life and destruction of land and property that comes with them," Inslee said. "We don't want a repeat of recent years with dangerous wildfires across the state that have destroyed towns, killed livestock and resulted in weeks of unhealthy air quality."

There are already wildfires burning in several areas of the state, including the Andrus Fire between Cheney and Spokane, the Batterman Fire between East Wenatchee and Quincy, and others.

"We have seen a record-breaking number of fires for this early in the summer," Public Lands Commissioner Hilary Franz said. "Extreme drought conditions leave communities across our state at risk . I'm asking everyone to do their part to and take precautions to prevent wildfires."