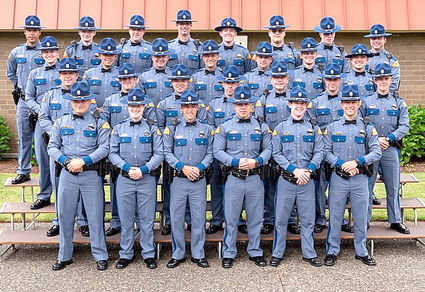 Travis R. Hullinger completed more than 1,400 hours of training prior to being commissioned by Chief John R. Batiste the ceremony today.

Hullinger received two awards in addition to his commission - the Top Overall Cadet and the Core Values awards.

The Top Overall Cadet Award recognizes the trooper cadet who demonstrated great courage to overcome obstacles, unwavering dedication to stay focus in reaching their goals and their ability to give 100% in every aspect of their training.

"Trooper Hullinger demonstrated the necessary skills, abilities and judgement to be an excellent trooper and he made extra efforts to make continuous improvements," a statement released by the patrol said.

Hullinger was presented the Core Values Award by Sandra Schaffer, who's husband, trooper Justin R. Schaffer, was killed in the line of duty March 24, 2020.

The award is dediced to the most recent state patrol employee to die in the line of service.

The award is determined by an anonymous vote of the graduating class and presented to the trooper cadet who exemplies the core values of leadership, partnership, professional excellence, integrity, accountability.

State Supreme Court Justice Steven Gonzales administered the oath of office to Hullinger and 27 other graduates who started Basic Training on Nov. 30, 2020.

"The 28 cadets graduating today endured a rigorous application process, extensive background investigation and received the best training," Batiste said. "Today, they will join the ranks of Washington's finest, as troopers of the Washington State Patrol."

Hullinger has been assigned to the patrol's District No. 2 detatchment in Bellevue, the patrol said.