Hanford Site to be hottest place in nation today 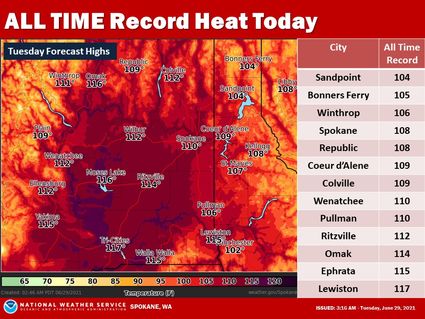 HANFORD SITE - The National Weather Service is predicting the hottest temperature in the country today will be here on the former nuclear reservation.

According to the agency, the high today is predicted to reach 119 degrees, at least 2 degrees hotter than nearby cities.

Pasco, Kennewick and Richland are expected to top out at 117 degrees today, setting a new all-time high for the Tri-Cities area.

The hottest June 29 on record was in 1904, when the temperature there hit 107 degrees, according to National Weather Service meteorologist Laurie Nisbet in Spokane.

And it won't be much cooler in nearby cities.

Sunnyside and Moses Lake are expected to reach 116 degrees today, as is Omak in North-Central Washington.

And Walla Walla, Lewiston and Yakima are forecast to reach 115 degrees.

This morning, she went through decades of weather data for several small towns within the Free Press Publishing readership area from Cheney to Hanford and Odessa to Colfax.

The Weather Service no long has a weather broadcasting system in the city – the Colfax station stopped broadcasting in 1994 – so, today's expected records will likely be recorded at a station in nearby Pullman or St. John.

That's one of the issues with comparing records, she said, noting weather stations come and go, sometimes providing very accurate data, sometimes not so much. So, record temperatures are only valid for the period a station may have been in operation.

The St. John station began operation in 1963, she said.

In Pullman, the record temperature was 110 degrees; today's high there is expected to fall short, but still reach 106 degrees, according to the National Weather Service's Internet-based forecast.

In Adams County, a record all-time high temperature is expected to be set today, Nisbet said.

On this day, the hottest temperature recorded in Ritzville was 107, set in 2015.

But that's far short of the record-high ever reported. Records show Ritzville's hottest day in recorded history was Aug. 5, 1961, when the temperature soared to 112 degrees.

The high today is predicted to top that record and reach 114 degrees, according to the National Weather Service.

On this day in Odessa and Davenport, a record high of 101 degrees was recorded in 2015, she said.

While the cities' daily highs are the same, their all-time highs are quite different.

Davenport's hottest day was recorded July 26, 1928, when the temperature hit 105 degrees, she said.

The forecast for today calls for breaking that record by 7 degrees, for a high of 112 degrees.

The National Weather Service does not operate recording stations in Cheney, Medical Lake or Airway Heights.

But Nisbet said it does record information at Geiger Field.

The Geiger area is forecast to set a new record today at 110 degrees.