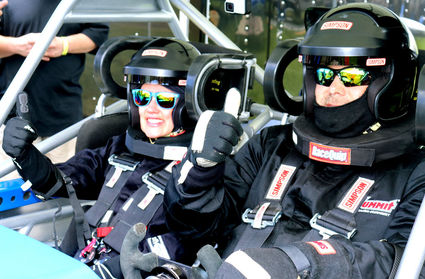 Sprint boat driver Dan Hatch, right, and navigator Wendy Manthei, both of Pasco, give a thumbs up as they ready for a qualifying heat at Webb's Slough in St. John.

"It's so much better," Team Pelican Fueling owner and driver Dan Hatch of Pasco said.

Sprint boat racing pits a driver and navigator against a maze of channels, and against the clock.

At speeds reaching more than 80 mph, the driver concentrates on making turns as the navigator memorizes the course and directs the driver using hand motions. Inside the boat, driver and navigator can experience turns in excess of 7Gs, or seven times the force of gravity.

"I'm liking it, liking it a lot," Dylan Hatch said.

Both father and son are drivers in the racing circuit.

Both vessels entered the Modified Class. Other classes included 400 and Unlimited.

It was his influence that led to two Pasco-based boats.

As a business owner for 20-plus-years, he previously sponsored the boat.

"It came up for sale and I decided to buy it," he said. "It was so much better and cheaper than a hydro."

But as the Hatches learned to dial in their boat, the team expanded to two boats, with Dylan Hatch taking the helm of the second race boat.

Saturday was his fourth race as a driver.

In racing Saturday, both father and son made it out of the qualifiers and into the elimination heats.

"We made the Top 8 cut, but didn't get any further," Dan Hatch said.

That's not a setback for Dylan Hatch or his navigator.

"It was a little tough this morning," Dylan Hatch said during qualifying heats. "But I think I'm figuring it out."

"This is my second season," she said, noting that growing up in the Tri-Cities area means she was exposed to all kinds of racing, including hydroplanes, go-carts and stock cars.

And when a boat hits an "island," the adrenaline really begins flowing.

Team Pelican Fueling boats had a couple instances when they needed the help of "island hoppers" – similar to course marshals in other forms of racing – to get their vessels back in the water.

But both father and son managed to keep their boats upright, even when their vessels slid across grassy islands.

That's not the case for all the boats in the field.

At least two ended up catching air and overturning.

The Sequim-based Live Wire went sideways, lifted off and overturned, landing right-side up on an island.

Island hoppers drug the vessel back into the water and the team later returned to the Modified Class heats.

In the 400 Class, driver Skylar Smith and navigator Marshall Bafus, both of St. John, were inside the other boat that flipped.

Smith missed a turn during a 400 Class qualifying run. Their boat hit one of the slough's "islands," went airborne and rolled sideways. The final impact was upside down in the water, but the momentum righted the boat.

Multiple island hoppers rushed to the boat to make sure both men were OK and to clear the mostly submerged vessel from the course.

"It was driver error," the 24-year-old Smith said of the crash.

A former schoolmate of both men was among those witnessing and responding to the crash.

Wyatt Wilson of St. John was the first to reach his friends.

"It was something," he said of the crash. "There was more adrenaline going through their bodies than anything."

Wilson said he worried when the boat initially rolled and impacted the water upside-down.

"They're a couple of my good friends and I didn't want to see them underwater," he said.

The uninjured Smith said he was more worried about finishing the race.

"I hope the motor is OK," he said, noting they may have a few "bumps and bruises."

Back in the race

The boat was more worse for wear.

The impact ripped the air filter system from atop the carburetor. Walter filled the fuel system, exhaust manifold and oil.

Island hoppers were able to recover all the parts from the water. And, after being towed off the course by a personal watercraft, the driver, navigator and pit crew rushed to get their boat running.

They pulled the carburetor and manifold, and drained and refilled the oil. 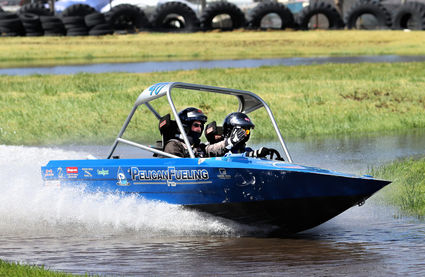 The Team Pelican Racing boat of Dylan Hatch and Darin Mickelson, both of Pasco, navigates the course at Webb's Slough.

They weren't able to get the boat together quick enough to make the fourth and final qualifying heat. But they had already done well enough to advance to the Top 8 elimination round.

As the elimination round started, they boat didn't. Smith requested a "wave off" to get the engine running and on the course.

Gurgling to life, Smith and Bafus entered the start channel and completed their final run.

But only the four fastest boats advanced to the next round.

They didn't make the cut.

The mishaps won't keep Smith or Team Pelican Fueling from returning to Webb's Slough for the next race on Aug. 28.

Manthei said she hopes some of students' families will be in the crowd.

"It would be great to have them come out and watch," she said.

"They need to come check it out," he said. "Hydros are cool, but this is cooler." 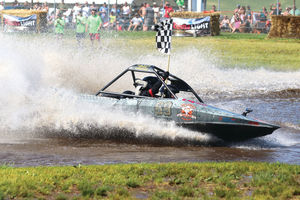 The No. 69 Overkill boat, with driver Dennis Hughes and navigator Samantha Hughes, both of Greenacres, takes an Unlimited Class victory lap after a finals time of 37.46 seconds.

2. 15M Rum Runner, driver Jerimy Brewer of Kennewick and navigator Presley Lollar of Benton City, by default with a did not finish (the other two competitor weren't able to start in the Final 4)

3. 411 Ballz Out, driver Dean Lautenschlager and navigator Jack Bringman, both of Lewiston, Idaho, 38.29 seconds in third qualifying round