Get ready for a heat wave

Forecast calls for Pasco temperature to reach 112 degrees next week 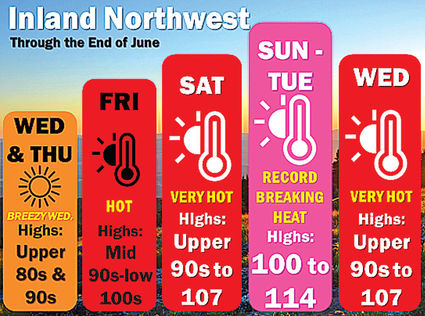 PASCO - The National Weather Service has issued an Excessive Heat Watch that will run from Friday afternoon through the end of the month.

"Very hot temperatures are expected by the weekend and through at least midweek next week," the watch said.

Temperatures may reach as high as 114 degrees is some areas of the Columbia Basin, according to the agency's forecast.

"There is some possibility that all-time record high temperatures will be reached or exceeded during this heat wave," the watch said.

In Pasco, the forecast calls for temps rising from 99 degrees Friday to 105 on Saturday, 109 on Sunday and 112 on Monday before sliding back to 109 on Tuesday and 106 next Wednesday.

The coolest temperature for the next week will be tonight, with a low of 61, the forecast shows. 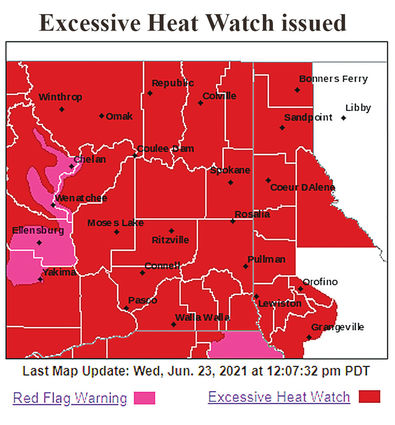 weekend into next week," the forecast shows. "Strong air subsidence and adiabatic heating of sinking air under this high pressure system will result

in record high temperatures from Friday through midweek next week in most areas."

The weather agency said the high temperatures will "significantly increase the risk of heat-related illnesses.

"Be prepared to drink plenty of fluids, stay in an air-conditioned room, stay out of the sun and check up on relatives

and neighbors," the weather service said.

"Young children and pets should never be left unattended in vehicles under any circumstances."

The Excessive Heat Watch covers most of Eastern Washington, and parts of the Idaho Panhandle and Eastern Oregon.