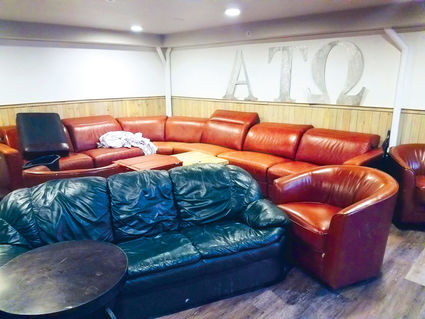 Samuel H. Martinez was left to sleep in the "chapter" room in the basement of the fraternity, where he died.

COLFAX – Fifteen people are charged with furnishing liquor to minors after a Washington State University (WSU) student died of alcohol poisoning in 2019.

Samuel H. Martinez, 19, of Bellevue, was a pledge to the fraternity Alpha Tau Omega on Linden Street in Pullman. He died on Nov. 12, 2019, during a fraternity event. The Wittman County coroner ruled his death as accidental acute alcohol poisoning.

Martinez was last seen to be alive at 2 a.m. on Nov. 11 while sleeping on his side in the "chapter" room, a basement of the Alpha Tau Omega (ATO) fraternity house, according to Pullman police investigation records.

The next morning at roughly 8:30 a.m. on Nov. 12, a student went down to the chapter room to clean up. He found most of the people, who had slept in the room, were awake. They thought Martinez was sleeping while he was face down on a coach until a student touched his hand and found it cold and blue.

The people finding him turned him over and started CPR until the Pullman Fire Department arrived. It was determined Martinez was dead.

The fraternity event Martinez took part in was the "Big/Little" reveal. It's when pledges meet their "older brother" for a mentor relationship while they attend WSU. It took place across the street from the ATO house at a building called Delta Chi. It's the former Delta Chi fraternity house on Monroe Street.

"We found out the upperclassmen that would be closest with and then you kind of bond with them by drinking with them," a student told police.

Another student told police the "big brothers" buy alcohol for their "little brothers" and are given the option not to drink. The big and little brothers have "twins" in another pair of upper and lower classmen. The four are called a family and only share one particular type of alcoholic drink between them.

Wes Oswald was Martinez's "big brother" and allegedly determined their family drink was rum. He told police he never forced Martinez to drink.

Oswald reportedly provided a full half-gallon of rum, which was shared with Martinez and fellow student Jacob Harvard. The bottle was shared between them until it was down to about 2.5 inches left in 30 minutes, according to police.

"Last night, all the guys were together and they were just drinking. A lot of them got too drunk and too rowdy," Martinez's childhood friend Colby Rosenwald told police. "Martinez was almost blackout drunk, (he) was barely able to walk and slurring (his) words."

Several students helped Martinez down the stairs to the basement into the chapter room, fraternity President Luke Hawksford told police.

Several students described Martinez as having been allegedly drunk before at "tailgater" parties and fraternity functions, including "date-dash."

The date-dash is when a male ATO fraternity member is handcuffed to a female. The handcuff key is dropped in a "fifth" bottle of liquor and the couple has to finish drinking it to get the key and be released, according to police reports. A student said most couples didn't finish their bottles.

Numerous students said ATO pledges are required to clean the Delta Chi building after parties and other functions. Some described it as the responsibility of the pledges, others as a punishment and hazing.

The Pullman police completed 177 pages of interviews and reports while investigating Martinez's death.

"The (15) young men are each charged with supplying liquor to one or more pledges at a fraternity event that was part of the initiation process," stated Whitman County Prosecutor Denis Tracy.

Furnishing liquor to minors is a gross misdemeanor punishable with up to one year in jail and fines of up to $5,000.

Tracy declined to make comments about the charges or Martinez's death, indicating he is willing to speak on them when the cases are concluded.

The following are charged with furnishing liquor to minors in Whitman County District Court: