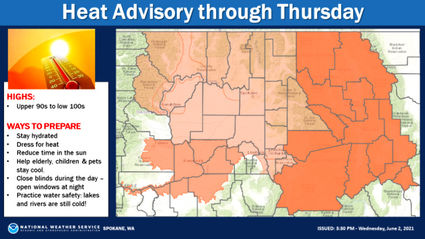 PASCO — Most of Eastern Washington will remain under a heat advisory through 8 p.m. Thursday night, June 3, as temperatures break into the 100s for the first time this summer.

According to the National Weather Service, the Lower Columbia Valley can expect temperatures to remain at or above 100 degrees.

"Hot temperatures may cause heat illnesses," the National Weather Service advisory said, noting temperatures will remain in the mid-100s in the area from Othello north to Omak and Grand Coulee, including the Wenatchee Valley, Vantage, Odessa and Wilbur.

In the Palouse region and Northeast Washington, residents can expect temperatures to remain in the upper 80s or low 90s, the advisory said.

Temperatures are expected to be slightly cooler in the Walla Walla area and Blue Mountains of Southeast Washington.

"Drink plenty of fluids, stay in an air-conditioned room, stay out of the sun, and check up on relatives and neighbors," the heat advisory said.

"Anyone overcome by heat should be moved to a cool and shaded location," the advisory said. "Heat stroke is an