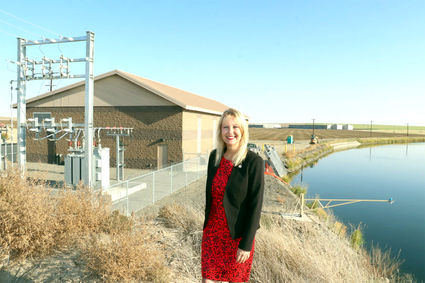 Bill Carroll I The Grower's Guide

WARDEN — A new pump station seven miles northeast of the city will provide irrigation water to nearly 10,500 acres of farmland.

The EL 47.5 station was dedicated Thursday afternoon, May 27. About 50 people attended the ribbon-cutting ceremony.

She pushed for $5 million to come from the state capital budget; the balance will come from the sale of East Columbia Basin Irrigation District bonds.

"This is the first new major delivery system of about nine planned so far to bring more water to those areas in the Odessa Subarea Aquifer as part of the Odessa Groundwater Replacement Program," Dye said.

The Columbia Basin Project, authorized by Congress in 1945, was intended to provide surface irrigation water to 1,029,000 acres. But it was never fully competed and only 680,000 acres are served.

Farmers and communities above the Odessa Subarea Aquifer have been using deep water wells to pump groundwater to the surface. But some of those wells are drying up.

Dye has been working to secure funding both at the state and federal level to advance the project.

"We've already helped to fund capacity expansion of the East Low Canal, which is the main water conveyance system into the Columbia Basin from Lake Roosevelt," Dye said. "Another $10 million of capital construction funds have provided for two large siphons in the Kansas Prairie region near Othello. And now, this new pumping plant will deliver surface water to farms, which will relieve the pressure on groundwater supplies in the aquifer that nearly 30 communities rely upon for drinking water."

Construction began in 2016 and the pump station was completed last fall, but began delivering water this spring.

Landowners in the Odessa Subarea Aquifer who have a water right for deep water wells, if eligible, may have that right converted by the Department of Ecology for surface replacement water from the East Columbia Basin Irrigation District's Columbia Basin water supply.

"The intent is to take pressure off the declining aquifer and save that groundwater for other municipal and domestic purposes that serve the area," Dye said. "It's expected to reduce groundwater depletion by nearly 73-million gallons a day.

"The opening of this new pumping station is a significant milestone in our long-term efforts to supply enough water to preserve our local farms and the jobs they provide, and save nearly 30 communities that rely on the Odessa Subarea Aquifer for drinking water."