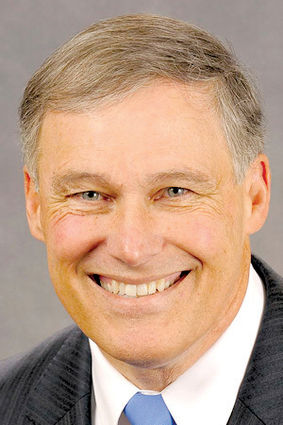 PASCO - Five voters led by a Pasco City Councilman have filed a petition to recall Gov. Jay Inslee from office for abusing the powers of his office during the coronavirus pandemic last year.

The recall petition was filed with the Secretary of State's Office in Olympia on Monday, May 17.

Gov. Inslee has yet to respond to the recall petition.

Under the state Constitution, any elected official in the state can be removed from office for misfeasance, malfeasance and violating an oath of office.

The first of five charges alleges the governor overstepped his authority by restricting religious freedoms guaranteed by the state constitution.

The state's founding document does not specifically give a governor authority to suspend basic constitutional rights due to a viral outbreak.

Charge No. 2 alleges the governor violated the state Constitution with coronavirus Proclamation 20-19, which prevented landlords from evicting those who fail to pay rent.

The proclamation violates Article IV, Section I of the state Constitution, the recall petition says.

The third charge alleges the governor exceeded his authority by suspending the state's Open Public meetings Act and infringed on "the People of Washington's right to petition the government for redress and infringing on the People's rights to peaceably assemble under the United States Constitution."

In charge No. 4, petitioners allege the governor further exceeded his statutory authority by restricting the number of people gathering in Proclamations 20-05, 20-06, 20-07 and 20-11, as well as other gubernatorial mandates, the petition says.

"Such a violation results in a valid claim for misfeasance, a violation of the Governor's oath of office, or boat; either result subjects the Governor to recall," the petition says.

In addition, the fifth charge alleges the governor illegally declared a statewide emergency Feb. 29, 2020, "without just cause as he failed to make a finding that a public disorder, disaster, energy emergency or riot existed in Washington state due to COVID-19," the petition says.

State laws does not specifically give the governor authority to declare an emergency over a public health outbreak if there is disorderly behavior, a physical disaster, energy emergency or riot.

"Such a finding is a condition precedent to declaring a state of emergency and is required by R.C.W. 43.06.010(12), the petition says. "The Governor's illegal COVID-19 Proclamations result in a valid claim for misfeasance..."

Sections 33 and 34 of Article 1 of the state Constitution allows any voter to file for recall of an elected official by preparing a typewritten charge, naming the official and his/her office and outlining any acts of misfeasance, malfeasance or violation of oath of office.

Gov. Inslee isn't the only governor facing recall for allegedly overstepping their authority with coronavirus orders.

California Gov. Gavin Newsom faces recall next fall after 1.71 million voters in his state signed a petition to remove him from office for violations of constitutional rights and business and school shutdown mandates.