By Drew Lawson
The Davenport Times

The hunt for space junk is on 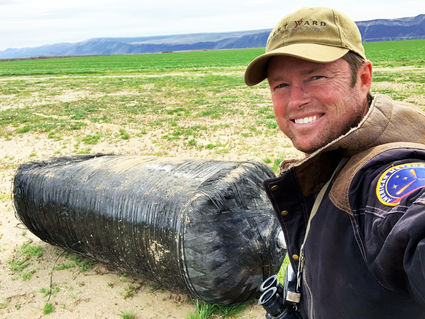 DAVENPORT – "BOOM!" What sounded like a bomb going off to Sami Guhlke hit the sky's soundwaves as the Reardan resident walked with her dog to pick up eggs from her family farm's chicken coop three miles south of town after the sun set March 25.

"At first I thought something went wrong at Fairchild (Air Force Base)," Guhlke said.

As it turned out, Guhlke wasn't the only person, locally or regionally, to hear the boom. In fact, many people captured its origin on camera across the state. Some surmised that a meteor had entered the atmosphere. Other folks wondered if the world was about to end, venting their fears on Facebook.

Neither idea was correct. The phenomenon was space junk from a falling SpaceX Falcon 9 rocket that would fall across Eastern Washington and send a professional meteorite hunter Washington's way...and eventually, to Lincoln County.

In fact, at least five pieces, including the engine, are believed to have fallen somewhere between Odessa and Reardan.

One catch: No one has found the pieces yet.

But it hasn't been for lack of trying.

Robert Ward is a professional meteorite hunter based out of Prescott, Arizona, who has traveled the world in search of meteorites, space rocks and junk that's crashed back to Earth. When Mike Hankey, a software coder and the operations manager for the American Meteor Society, collected eyewitness accounts of the March 25 phenomenon and compiled data on where the pieces could have landed, he alerted Ward.

Three days later, Ward arrived in Yakima to begin his hunt for pieces from the rocket that was originally launched March 4 as part of Elon Musk's plan to put satellites into space that can provide broadband internet globally through a program called Starlink. Over the next few weeks, he found three 200-pound tanks just east of the Columbia River in Grant County, one of which came very close to hitting someone's trailer.

He took two of the pieces back to Arizona in the bed of a Ford F-150. The third was confiscated by the Grant County Sheriff's Department.

Thanks to his work with Hankey, who has been conducting all this work remotely in Maryland, and NOAA meteorologist Ken Howard, Ward deduced that five or six pieces of the rocket, including the combustion chamber, had fallen farther east...likely between Odessa and Reardan.

The team was able to surmise the Lincoln County location by tracking where the pieces "went dark;" which occurs "because it's not going fast enough to ionize the air around it, which makes it not bright and land no further than a couple miles away," Hankey explained.

The heavier the piece, the farther east it would likely fall, Hankey said, due to the inertia it takes to slow objects down. The heaviest piece may have bypassed Lincoln County altogether and headed toward Idaho, or farther due north.

"It's like when you're driving and trying to brake in a car," Hankey said. "You leave more distance between you and the car ahead of you if you're in a larger car, because it takes more time to break in the heavier car."

Ward headed over to Lincoln County after his successful discoveries in the Yakima/Grant County area.

"I went up there (to Eastern Washington) on two separate trips for three weeks total," Ward said.

He spent time in Reardan, Davenport, Odessa and Harrington, chatting with local farmers about his mission and hunting across the county for any trace of the junk.

One local farmer that Ward interacted with was Trea Nonnemacher, whose family farms about 5,000 acres just east of Davenport off Jannett Road. Nonnemacher said the family was driving home April 3, when they saw a man walking around Hein Road. It was Ward, who explained his mission.

"He wasn't on private property. He kind of flagged us down and told us the whole story," Nonnemacher said. "He said the engine likely landed in one of our fields...he pointed toward Reardan from where we were standing."

After chatting for about an hour, Ward left to continue his hunt, then returned to the Nonnemacher's farmhouse the next day to touch base.

"He talked to my kids a little bit...and gave them a DVD. It was a documentary on space that he'd help make," Nonnemacher said. "He was really great with the kids, and he said he'll go and talk at schools...he's a very, very nice man."

The Arizona-based meteorite hunter version of Indiana Jones has preferred to rely on farmers for intel on where the rocks may have landed. He didn't talk much to authorities or local government figures...though he noted "that would be a good idea."

The Lincoln County Commissioners hadn't heard that pieces likely fell here...neither had the Reardan Police Department or town clerk. Sheriff Wade Magers had heard rumors, but nothing reported to the sheriff's office. The Times learned about the story through an article in the Seattle Times, though Ward said he had planned to reach out soon when contacted. The Odessa Record was similarly in the dark.

To many, the local angle of the phenomenon remained a mystery.

But despite many interactions with local farmers, Ward's search has yet to prove successful. However, a recent turn of events may provide more insight into where the Lincoln County trash-turned-treasures may have landed.

When Dr. Michael Landry read the April 26 Seattle Times article, he realized his department could be of assistance.

Landry is the head of the Laser Interferometer Gravitational-Wave Observatory (LIGO) owned by California Institute of Technology located in Hanford, which is near Richland. Landry emailed Hankey on April 24, who has been conducting all this work remotely in Maryland, and told him that his observatory captured the re-entry arc of the rocket heading northeast.

Through the video, Hankey said the team will be able to better locate the objects using radar and constrain the line that the pieces headed.

"In these events, there's 100 fireballs that result," Hankey said. "In the video, there's 12. The one that lands furthest away is the brightest and heaviest object....we can figure out the altitude of the fireballs in the video and figure out the maximum distance it could (have landed)."

"So, if you heard the boom, you're close to where this happened...likely within 50 kilometers," Hankey added.

What to look for

Though recent technological advancements and Hankey's assistance from the LIGO Hanford Observatory will help in the hunt for where in Lincoln County these items may have crashed, Ward said farmers keeping an eye out when plowing may be the best...or only...way any of any pieces being discovered in the vast wheat fields of the county.

"If you hit any parts, the telltale sign is the ablation from the atmosphere," Ward said. "It will have a very rough surface and be discolored from the heat."

It's possible a farmer could stumble upon a piece weighing hundreds of pounds. It's also possible the metal will have made such a strong impact that it will have left just a hole in the ground.

Ward said if any pieces are reported in Lincoln County, he plans to be back here to inspect. But for now, the discovery of space's unwanted items in the wheat fields of Eastern Washington is left to meteorologists working remotely and the farmers who call the county home.