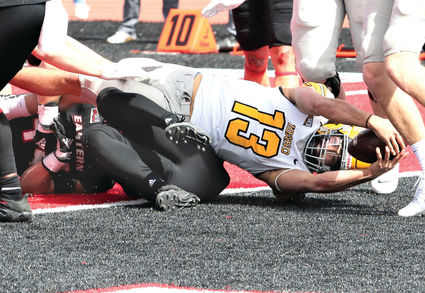 Kamiakin graduate Zach Borisch dives over the goal line for an Idaho touchdown in Saturday's game at Eastern Washington University in Cheney.

CHENEY - The Eastern Eagles came from behind Saturday to top the Idaho Vandals, 38-31, in the final Big Sky season matchup of the year. 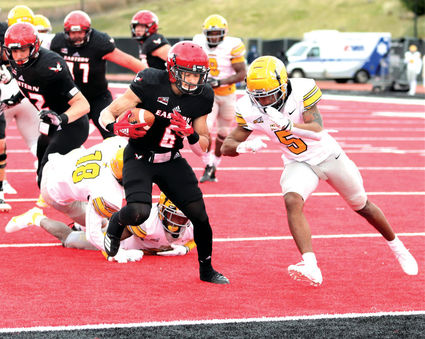 Dennis Merritt, a graduate of Cascade High School in Leavenworth, scored the final two touchdowns to give the Eagles the win.

On the other side of the line of scrimmage, Idaho's quarterback and fullback, both from Eastern Washington, put points on the board for the Vandals during the gridiron grudge match.

Kamiakin High School graduate Zach Borisch, running back turned quarterback, put the Vandals on the board first with a dive over the goal line early in the first quarter.

And Cheney High School graduate Logan Kendall, the Vandals' fullback, caught a pass from Borish and rambled into the endzone early in the third quarter.

Idaho's football season came to an end with the loss; Eastern is looking for a FCS playoff berth.