Whitman County rolling back to Phase 2

87% of county's new coronavirus cases are in Pullman 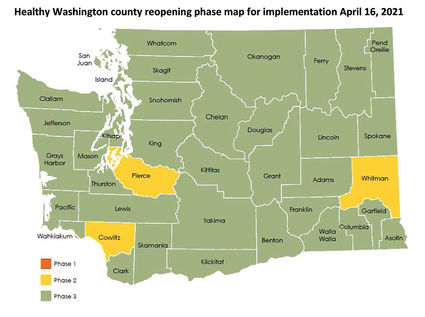 Whitman County is among the three counties the governor is rolling back to Phase 2 on Friday.

OLYMPIA - Gov. Jay Inslee announced today that he will be moving three counties backwards in their coronavirus reopening effective Friday.

For a small-population county like Whitman to remain in "Phase 3," the governor said it would be required to have less than 200 coronavirus cases per 100,000 residents over the last 14 days and less than five new hospitalizations in the last week.

Whitman County reported 210 cases over the last two weeks, mostly connection to Washington State University, according to the state Department of Health data, which showed the county had only 3 hospitalizations in the last week.

The data shows 87% of new cases were reported in Pullman, 6% Colfax and 3% Rosalia, with all other areas of the county having 1% of cases or less.

Gov. Jay Inslee last week tried to distance himself from the decision to move any counties backwards, saying the data would determine any rollbacks.