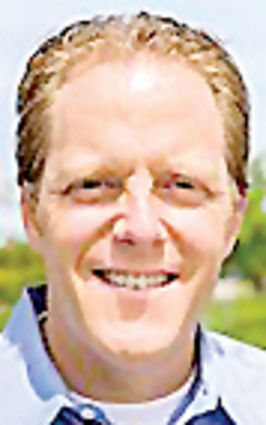 Jerrod Sessler of Prosser has announced his candidacy for Washington's 4th Congressional District.

PROSSER - Rep. Dan Newhouse's refusal to support former President Donald J. Trump in January may cost him his seat in the U.S. House of Representatives.

Over the weekend, another conservative Republican challenger announced his candidacy in a bid to unseat Newhouse in a primary challenge, even though the primary is more than a year away.

Jerrod Sessler, 51, of Prosser, announced his 4th Congressional District candidacy, citing Newhouse's decision to back Democrats in the impeachment vote Jan. 13. Newhouse was one of only 10 Republican lawmakers to break ranks in the failed effort to remove the president from office.

"As patriotic Americans, we find ourselves at the whim of a small but radical faction that seeks to control us, cancel us and belittle our traditional values," Sessler said. "We need even more of the bold leadership we have seen in recent years to oppose the radical leftist agenda that is determined to destroy America."

Sessler is a Navy veteran, entrepreneur and a former NASCAR driver.

His new webpage describes him as an America-first advocate and "determined to serve his country once again, this time as Central Washington's representative in Congress.

Sessler is vowing to continue America-first policies, while defending district families and farmers from a "bloated government bureaucracy and an out-of-control leftist minority."

After graduating high school, Sessler served as a petty officer aboard the USS Constellation in the U.S. Navy, having earned the U.S. Navy Achievement Medal.

Now a vegetarian, Sessler survived Stage IV cancer after only being given a 5% chance to live.

Sessler and his wife, Nikki Sessler, have been married 25 years and raised three children, who are now adults.

Sessler isn't the first to announce a primary challenge against Newhouse, whom many see as a career politician.

Klippert is a deputy with the Benton County Sheriff's Office and also the elected representative for the 8th Legislative District. He serves as the assistant minority whip for House republicans.

Klippert retired from the Army National Guard as a lieutenant colonel in May 2016. Just three months later, he was appointed commander of the Washington State Guard.

Klippert has twice run for the U.S. Senate.

He and his wife, Kim Klippert, also raised three children, who are now grown.

Klippert, too, pointed at Newhouse's refusal to support President Trump.

The decision to enter to congressional race follows moves by most Republican committees in Newhouse's district.

In a February letter, Franklin County precinct committee officers called out the 65-year-old Newhouse for siding with Democrats in Washington, D.C., as well as failing to meet with them during his tenure in Congress.

"We, the Precinct Committee Officers and Members of the Franklin County Republican Central Committee find ourselves without Congressional representation," the letter said. "We've neither seen nor heard from you in years. Our lack of representation by you is compounded by your floor speech and ensuing vote of impeachment."

Republicans demanded Newhouse appear at a Franklin County Republicans meeting before June 1 to explain himself and why he went against his constituency in voting in favor of impeachment.

"We repudiate your vote," the letter said.

According to the letter, President Trump advocated for "peacefully and patriotically" letting Congress hear the voices of his supporters.

He did incite any riot, the letter said.

"Mr. Congressman, impeachment is a serious charge that the constitution reserves for "high crimes and

misdemeanors," the letter said. "With your speech and your vote, you have betrayed your constituents."

The letter notes that the Washington State Republican Party has censured Newhouse.

It further notes that Republican committees in six of the eight counties that make up the Fourth Congressional District have demanded Newhouse resign immediately.

Newhouse has previously said publicly that he is refusing to resign.

"You have lost touch with the people you claim to represent," the letter said.

Because Republicans said they do not have a constitutional process to recall Rep. Newhouse, they are demanding Newhouse appear in person "so that you can hear from the people who have supported you, and respond to the lack of trust, the lack of confidence, and the lack of faith that we now have with you."

For his part, Newhouse, of Sunnyside, has defended his decision.

Newhouse served four terms as the 15th Legislative District representative in the state House, from 2003-2009. It's a post he was familiar with as his father, Irving Newhouse, had served in the same capacity from 1965-1980.

Dan Newhouse was then appointed by Democratic Gov. Christine Gregoire to serve as the state Department of Agriculture secretary, a post he had until 2013. In 2014, Newhouse ran for the congressional seat being vacated by Doc Hastings. He's now in his fourth congressional term.

Newhouse isn't the only Washington Republican facing a conservative revolt for their decision.

Those challenges, too, stem from her decision to impeach President Trump.