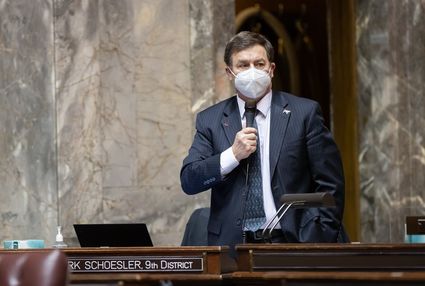 Senator Schoesler of Ritzville speaks out against the Climate Commitment Act.

"This is another bill that would punish people and companies, without any proof of even helping the climate," Schoesler said. "The bill is called the Climate Commitment Act, but I'm afraid the only thing it will commit Washingtonians to is handing over more of their hard-earned money for an environmental plan that won't work."

Schoesler said many residents in his 9th District would not qualify for any of the exemptions from the proposed tax.

"This cap-and-tax bill offers several types of exemptions, except for rural communities, middle-class families or individuals, and small businesses," Schoesler said. "This is a very unfair, inconsiderate and inconsistent bill to people in the 9th District and other rural districts in our state."

Under Senate Bill 5126, the state would set statewide emission limits. Companies could purchase a "permit to emit" at an auction run by the Department of Ecology. The proposal calls for allowable emissions to decline each year.

"If this bill becomes law, it will tax people to the tune of $500 million just to have a permit to emit," Schoesler said, "and judging by the 75-page fiscal note for this bill, this 'cap and tax' bill is extremely complicated, which is never a good thing for taxpayers."

Schoesler said during a public hearing on the bill held by the Ways and Means Committee, one opponent testified that a 2019 analysis found carbon emissions from oil and gas have actually increased since a cap-and-trade policy began in California.