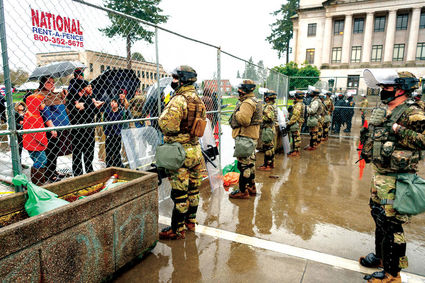 National Guardsmen stand inside of a fence put in place to prevent protesters from entering the part of the Capitol campus.

OLYMPIA — Sen. Mark Schoesler is frustrated by the complete closure of the Legislative Building and other Capitol campus buildings to the public during the 2021 legislative session.

Buildings on campus have been closed to the public since last March, due to the COVID-19 pandemic. But following the break-in of the nation's Capitol, Gov. Jay Inslee has fenced in several buildings and deployed a contingent of nearly 1,000 National Guardsmen and Washington State Patrol troopers to secure the campus through at least Jan. 20.

Representing the Ninth Legislative District, which includes Whitman County, Schoesler expressed concern that while the Legislature is in session doing the people's business, the people are not allowed to see their elected legislators in action or to interact in-person with them.

"I understand why fencing was put around the Capitol, and why there is such a strong presence by members of the Washington State Patrol, and National Guard and legislative security personnel," Schoesler said Jan. 14. "Nobody saw a reason for any of this until the U.S. Capitol was attacked. Now that the 'wall' is up, Gov. Inslee says he wants it to remain ... I wonder if he'll just leave it up indefinitely."

Schoesler, R-Ritzville, said assuming the fence comes down and additional security force goes away, the public will likely still be kept at arm's length by the majority Democrats' restrictions on public access.

Schoesler said while he appreciates the interest in protecting legislators, staff, lobbyists and the public from exposure to COVID-19, conducting work virtually has created a new kind of "haves" and "have-nots," here.

"One of the reasons I'm at the Capitol, instead of working from home like many legislators, is that I won't risk missing a debate or a vote if there's trouble with the internet service at my farm," Schoesler said. "Those who have reliable internet will be able to consider testifying remotely before legislative committees. Those who don't will be shut out, because they don't have the option of traveling to Olympia and testifying in person."

Schoesler pointed out the hypocrisy inherent in certain places having public access and others being closed off.

"If people can shop at big-box or small retail stores, the public should be able to enter the Capitol, as well," Schoesler said.

Gov. Inslee did not respond to The Journal before presstime.