Restaurant and tavern employees and supports pour fake liquor out during a Boston tea party-like protest at the state Liquor and Cannabis Board office in Pasco on Jan. 6.

PASCO — Call it a bartenders' version of the Boston Tea Party.

On Wednesday, Jan. 6, approximately 40 protesters gathered in front of the state Liquor and Cannabis Board office, 2715 Saint Andrews Loop, Suite B, to raise awareness of the "unconstitutional" and "illegal" tactics being used by the agency's employees to try to shutdown indoor table service at restaurants, bars and taverns around the Tri-City area.

Indoor service has been shuttered by Gov. Jay Inslee as part of his coronavirus lockdown.

In a symbolic protest, rather than toss tea into a harbor — like the historic Dec. 16, 1773, event protesting a British tea tax — the crowd poured out liquor bottles filled with non-alcoholic beverages.

Standing in a cold rain, protesters rallied for about an hour in front of the office beginning at 4 p.m.

As protesters arrived, they took note that liquor board employees locked up and went home before the protest was slated to begin. The agency's website says its offices are open from 8 a.m. to 5 p.m., but the building in Pasco was vacant before 3 p.m.

One person representing the office or the property owner awaited the protesters. At about 3:30 p.m., he asked early arriving organizers not to enter the parking lot or approach the building.

To ensure there weren't any issues, two Pasco police SUVs parked a block away in a location where officers keep tabs on the rally.

Jen Pendleton of Kennewick, an employee of Sterling Restaurants, got the rally going, taking the bullhorn first.

"We here to protest the tyranny the governor and the liquor board have imposed on us," Pendleton said. "Less than 1% of (coronavirus) cases are coming from restaurants. Cases are still rising and restaurants have been closed down now for almost two months."

Pendleton said the state numbers show about 25% of cases are coming from retailers, yet big box stores are allowed to remain open.

There's no way to clean every surface touched in big stores, she said.

Furthermore, it's not economically feasible for most restaurants to try to erect elaborate structures outside, complete with heating systems for patrons.

"We have a right to work," she said. "We don't want to sit at home and have the government provide for us."

She also noted that government help has fallen short.

Pendleton's sister, Heather Walker of Kennewick, was laid off from Bonefish restaurant Nov. 15.

"I've not worked and I've not gotten any unemployment," she said while chatting with others at the rally. "I'm worried about not having a job to go back to."

Neither Walker nor Pendleton believes Gov. Jay Inslee's newest phased plan, "Healthy Washington," will work. Instead, they said, it's just another sabotage tactic the governor is using to keep small businesses shuttered.

Under the new plan, the state's 39 counties are grouped into eight regions. Franklin County is in the "South Central Region," along with Yakima, Benton, Walla Walla, Columbia and Kittitas counties.

Statewide, not a single region meets the thresholds set to allow restaurants and other indoor service businesses — like gyms, theaters, entertainment and sporting venues, etc. — to reopen under the governor's new plan.

"They are just going to continue to continue this shutdown," Pendleton said off the megaphone. "I would like to have a job. But I think he (Gov. Inslee) is going to keep us shut down as long as he can.

"The restrictions are just going to get tighter, tighter and tighter. The control is going to get more and more out of hand."

That's the message Patrick Bauguess, who organized a local group to assist businesses and others who want to keep society open.

Bauguess took to the megaphone to remind protesters to stand up and tell the governor — and the Liquor and Cannabis Board — enough is enough.

As he wrapped up his turn speaking, liquor bottles filled with colored water were passed out to protesters.

And in one symbolic move, they emptied the bottles on the ground in front of the liquor board office, sort of a modern-day re-creation of the Boston Tea Party.

"The liquor board has jurisdiction over service of liquor and alcohol, but not to shut down a business on a non-liquor violation," Pendleton said.

As the bottles emptied, the protesters marched up St. Andrews Loop and took up a position on 20th Avenue.

Motorists heading to and from the Tri-Cities airport and those coming and going at Columbia Basin College honked in support.

West Richland resident Sarah Duncan was present to show her support of local business, as was Tom Johnson of Benton City. Neither work in a restaurant or bar, but both said it was important to back local businesses fighting to stay alive.

"What's going on is unconstitutional, and wrong," Duncan said. "It's a war on the people."

The protest in Pasco was the second anti-liquor board event in three days. 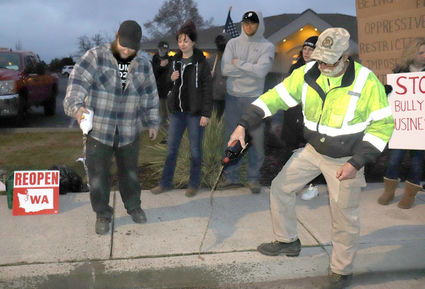 Restaurant and tavern employees and supports pour fake liquor out during a Boston tea party-like protest at the state Liquor and Cannabis Board office in Pasco on Jan. 6.

The first protest took place Monday, Jan. 4, at the agency's Spokane office at 1303 W. Broadway Ave. There, more than 50 people turned out for an hour-long protest.

Co-organizer Caleb Collier, former state Rep. Matt Shea, restauranteurs Wayne and Brandon Fenton, and others had a more traditional protest, rallying first at the liquor office then taking their message to the Spokane County Courthouse.

Standing on the courthouse steps, the protesters waved flags and used a megaphone to get the attention of county employees.

Many went to the windows above the protest, cupped their hands around their faces and peered out.

Protesters there also marched briefly down Broadway Avenue, where they were met with hongs of support.

Read about the "Pushing back against bureaucratic harassment" protest story online in the Cheney Free Press at http://www.cheneyfreepress.com.