Counties grouped into regions, this time 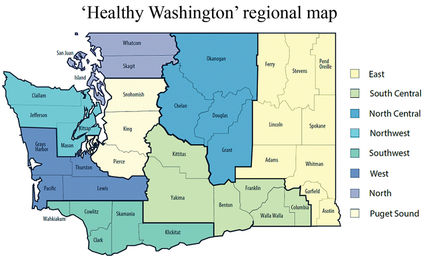 PASCO - Area restaurants, bars and gyms may be able to reopen indoor services as soon as Jan. 11 under another coronavirus-related plan release by Gov. Jay Inslee during a press conference Tuesday.

Under the plan, the state will be divided into eight regions based on proximity to health care services.

Franklin County will be grouped into the South-Central Region along wth Columbia, Walla Walla, Benton, Yakima and Kittitas counties.

All regions will be designated as "Phase 1" until at least Monday, Jan. 11.

Regions that show a 10% decrease in coronavirus cases and related hospital admissions, less than 90% intensive care unit occupancy and less than 10% positivity in testing will be eligible to move to "Phase 2."

Case rates will include prison and jail inmate data.

Restaurants, bars and taverns in regions that move to Phase 2 will be allowed to have 25% indoor capacity, as will gyms and fitness centers.

In the Tri-Cities, Kimo's Sportsbar and Brew Pub, Koko's Bartini, Shakey's Pizza, Sterling Restaurants, Barley's Brewhub and others are among other businesses, have been ordered to shut down indoor table services since Nov. 15, by order of the governor.

Sporting events will also be allowed to resume, "with limited spectators," under Phase 2.

Fehrenbach said that the agency will be monitoring the data and any region that doesn't meet advance criteria will be moved back to Phase 1.

"DOH will start posting analyses using the most complete data Friday," she said, noting the agency will check the numbers every Friday to determine which regions are in Phase 1 or Phase 2.

But based on data this week, the governor said no region meets his criteria for moving to his new Phase 2.

"The numbers are not down yet at the level or rate that is necessary," he said, calling his new plan science-based.

Among the lowest rates

However, State Secretary of Health Umair A. Shah said Washington has among the lowest rates of COVID-19 cases of any state in the country.

"Our case rates have started to come down," he said.

That may not be good enough for restaurants, bars, fitness centers and other businesses across Eastern Washington, where some have attempted to remain open, only be to met with warnings or a citation from the state Liquor and Cannabis Board and state Department of Labor and Industries.

On Monday, a group of 70 restaurateurs rallied in front of the liquor board office to challenge what they say are unconstitutional and illegal attacks on local businesses.

Another protest targeting the liquor board is set for 4 p.m. Wednesday, Jan. 6, at the Pasco office. When questioned about restaurant and bar owners operating in defiance of his orders, Inslee responded.

"We're in the business of saving lives. And we know that saving lives entails reducing risk. And we know that one of the most riskiest environments is when people sit across the table for an hour, hour-and-a-half, dine and enjoy each other's company and cannot wear masks," he said. "This is a central, fundamental tenet. It's a little bit surprising to me that people don't sort of figure that out on their own."

He downplayed the comparison of shopping to dining.

"People wear masks when they go to stores; it's a very, very different environment," he said. "You can't wear a mask and eat... That risk is too risky right now."

The Washington Hospitality Association has blasted the governor in recent months for ordering indoor table service shuttered without being able to provide any empirical data proving the coronavirus is being spread at restaurants, taverns or bars.

This is the first phased plan Gov. Jay Inslee has offered as hope for those wanting to reopen Washington among the coronavirus outbreak.

Last March, the governor issued the first of several plans for reopening businesses, government agencies and other activities.

In May and June, he updated the plans.

In August, he added a "Modified Phase 1" for multiple counties that were still being locked down under the previous guidelines. That modified phase was then updated in September.

A phased approach to school reopenings was also established.

As the fall progressed without high school sports, a new phased approach for athletics was also instituted, with sports being phased in based on the virus' spread risk.

And prior to this plan, a phased plan for who would get vaccinations first was implemented.