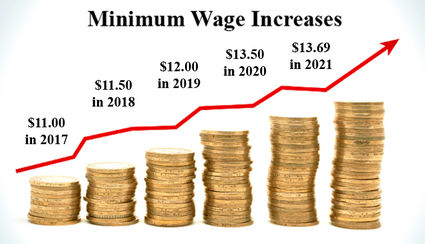 OLYMPIA - As of Jan. 1, low-wage earners and some salaried employees are being paid more for their efforts on the job.

Across Eastern Washington and some areas west of the Cascades, the minimum wage increased 19 cents per hour, from $13.50 to $13,69, according to the state Department of Labor and Industries.

The minimum wage in the cities of Seattle and SeaTac increased to $16.69 per hour and $16.57, respectively, the agency said, noting those minimum wages are set by city ordinances.

Elsewhere in the state, the minimum wage is established under Revised Code of Washington 49.46.020(3).

New rules for salaried employees also mean higher wages for some workers who exceed 40 hours in a week.

Non-commissioned workers making less than the salary threshold are now required to work 40 hours or less, or be paid overtime.

The new law also sets new minimum rates for computer programmers and system managers who are paid by the hour.