Protesters to rally in front of liquor board office 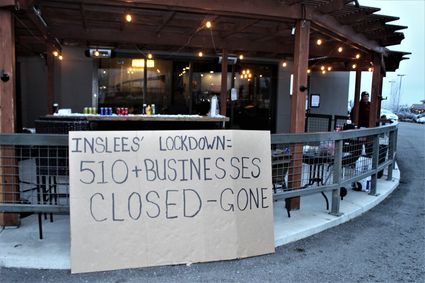 A sign last month in front of Koko's Bartini, 4309 W. 27th Place Suite 100, Kennewick, shows the impact of coronavirus orders and Liquor and Cannabis Board actions.

UPDATE: In addition to Pasco, a group of Spokane-area residents and restauranteurs will be protesting in the parking lot of the Liquor and Cannabis Board office, 1303 W. Broadway, Spokane, at 11:45 a.m. Monday, Jan. 4. It is being organized by Spokane Valley resident Caleb Collier following complaints liquor officers have threatened to fine, revoke licenses and even file criminal complaints about restaurants and taverns from Spokane Valley south to Colfax and Pullman.

PASCO - Supporters of area restaurants and taverns offering indoor servings in defiance of Gov. Jay Inslee's coronavirus-related shutdown orders will be going on the offensive this coming week.

Instead of protesting in front of the businesses they support, they will be taking their peaceful protest to the Liquor and Cannabis Board office, 2715 St. Andrews Loop, Suite B, at 4 p.m. Wednesday, Jan. 6. The peaceful protest will include signs and speeches, protesters said.

Organizers said they want to make sure public workers employed by the Liquor and Cannabis Board hear their complaints over the unconstitutional shutdown orders and the workers' threats of fines and liquor license revocation.

Gov. Jay Inslee himself has even threatened jail time for restauranteers and others who continue to keep inside table service available.

The upcoing protest at the Pasco liquor board office comes more than a month after protesters rallied in front of the Kennewick home of Austin Shively, a liquor board officer who allegedly threatened the owners of local eateries and taverns that stayed open with fines, license revocation and other penalties.

Patriot Prayers Joey Gibson led that protest, as well as two others in Pasco.

New round of threats

While organizers of this protest didn't specifically cite Shively, they did say a renewed round of threats prompted the protest.

Some of the businesses threatened, again, include Kimo's Sportsbar and Brew Pub, Koko's Bartini and Barley's Brew Pub, among others. Kimo's has sinced closed their doors to inside services.

Business owners say officers show up and cite Washington Administrative Code 314-11-015(3)(c) as the grounds for their enforcement effort. Under the code, establishments with a liquor license "have the responsibility to control their conduct and the conduct of employees and patrons on the premises at all times."

Protesters and business owners say gubernatorial orders unrelated to alcohol are not covered by its use as a "catch all" by liquor officers.

Restaurant and tavern owners say the governor and Liquor and Cannabis Board need to provide proof that their establishments are a risk to public health.

To date, neither the governor nor liquor board has provided any definitive proof.

Washington Hospitality Association CEO Anthony Anton last month criticized the state for failing to provide any proof restaurants and taverns are causing the virus to spread.

Just last week he again chastied the state for continuing to order inside services shuttered.

"When will main street businesses see a plan from the governor that will pull them back from the brink rather than pushing them over it," he said is response to an extension of Gov. Inlee's orders to Jan. 11, the first day in the upcoming legislative session.

"When the governor substantially shut down the hospitality industry in November, he indicated cases would level off and we expected to see a detailed path to reopening. Seven weeks later, neither of those things are true," Anton said. "Hospitality operators are falling deeper in the red. Hospitality workers remain out of work.