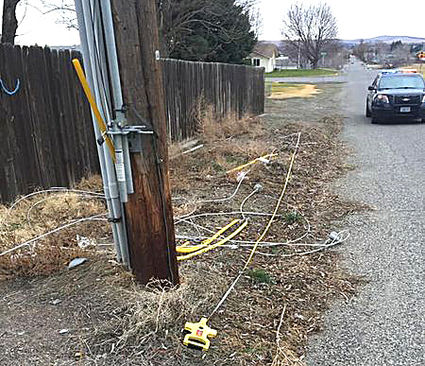 According to police records, a teenager, whose name has not yet been released, struck and hit a power pole near the Road 68-Richardson Road intersection about 1 p.m.

The impact knocked a guy wire loose, police said. The wire struck power lines, shorting them out and knocking out power to about 1,000 Franklin County Public Utility District customers.

A landscaping crew worker photographed the vehicle's license plate and notified police, a report said. Officers located the vehicle and the teenager nearby.

"The juvenile driver plead their case, while holding a #freshlyblendedrevle," a Police Department social media post said. "They were desperately trying to avoid hitting the poor cat in the road, but instead found a power pole."

The teenager told police he was northbound on Road 64 and swerved to avoid running over a cat, police said. He was cited for hit-and-run and released.

Power was restored after about an hour.