Koko's owner apparently wins first round against liquor board 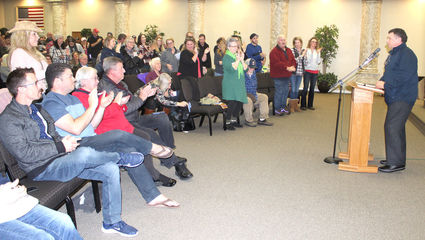 Koko's Bartini owner Dana Slovak speaks to a crowd of more than 250 people Sunday night, the night before he faced off in a settlement conference against the state Liquor and Cannabis Board.

KENNEWICK - The owner of a local eatery and martini bar has apparently won a round against Liquor and Cannabis Board agents trying to use gubernatorial coronavirus orders to shut down inside service.

"We have a stay, meaning the liquor board cannot bother us anymore until we see a judge," Koko's Bartini owner Dana Slovak said in a video on social media Monday morning. "So come on out to Koko's Bartini."

During a settlement conference Monday, Dec. 14, Slovak said the liquor agent offered to reduce the business' fine from $500 to $300.

"We said we are not paying the fine and cite the violation," Slovak said in the video.

The Liquor and Cannabis Board has yet to comment on the hearing.

"He (the agent) tried to proceed on other things," Slovak said, noting his legal counsel at Celski Law Firm brought the liquor agent on track.

Under that section, the governor's emergency orders cannot violate First Amendment rights to freedom of speech and the right of the people to peaceably assemble.

Slovak said the agent stammered a bit, then decided to press forward to a formal hearing, which won't occur until mid-to-late January.

"I think we had him," Slovak said. "He was not about to agree with our argument at all."

Slovak is now awaiting a notice to appear he said.

In the meantime, the parties agreed to a "stay," Slovak said.

"We are free and clear to open up," he said, noting Koko's is open 4-9 p.m., Tuesdays through Saturday.