Protesters turn out to Koko's Bartini

Dana Slovak, owner of Koko's Bartini in Kennewick, stands with a sign calling out Gov. Jay Inslee as "non-essential."

KENNEWICK — Hundreds of supporters turned out Saturday night to help Dana Slovak in his fight to keep his restaurant and bar open amid unconstitutional coronavirus mandates.

Outside, about 75 protesters braved the cold to wave flags and carry protest signs. Motorists passing by Slovak's 4309 W. 27th Place Suite No. 100 restaurant honked in support. Inside, tables filled up, emptied and filled again with customers wanting to dine inside the upscape establishment.

"I'm trying to stay humble," Slovak said of the turnout and support for his effort to stay oepn amid Gov. Jay Inslee's orders shuttering inside service at restaurants until at least Dec. 14 (the day the Electoral College is required to officially select the next United State president-elect).

Meanwhile inside the upscale restaurant and martini bar, patrons took a seat to order dinner and drinks, filling the tables many times over during the several-hours long event. Slovak's employees were literally running to try to keep pace with the number of patrons who turned out to order dine in.

As the event continued, Slovak opened up an atrium alongside his restaurant for protesters to get in out of the cold and to hear from keynote speakers.

Donnie Landsman took over the microphone as the emcee.

Pasco City Councilman Serrano was among the first to speak to the mostly unmasked crowd.

Serrano said shutdown edicts from the governor haven't gone unnoticed in his city. And on Monday, Dec. 7, he said the council will be taking up discussion of an ordinance he hopes to make similar to one previously approved in the city of Mossyrock declaring the community a "sanctuary" safe from the governor's orders.

"I've seen the packet," he said, noting that it doesn't quite have the passion that Mossyrock's ordinance has. "It's close enough that I can push the issue."

Serrano said the last nine months haven't been uncomfortable, as the governor has said.

"They've been bad," he said. "We can't sit around, look at our community and say 'sorry.'"

Serrano said he hopes his colleagues on the council will join him Monday and tell the governor enough.

"Hopefully, we can push things through and tell Inslee to just leave us alone, go away, don't be a self-appointed oligarch," he said.

According to Serrano, the Tri-City area needs to "stand together, unit and do what we can to preserve our rights."

Higgins, too, said the community needs to stand together, not just against the closures, but also against coronavirus testing, mask wearing and unconstitutional overreach.

"COVID measures are outrageous," he said. "It's not Ebola, not SARS. It's politics..."

Higgins called masks "face diapers," saying he won't wear one. He even recounted a story whereby he lost his substitute teaching post because he refused to wear one.

"Somebody had to stand up," he said, noting the barrage of testing and governmental recommendations turned orders are only adding to hysteria.

Teacher Tara Childs picked up where Higgins left off.

Sheriff Hatcher, too, vowed to stand up for what is right and against unconstitutional mandates.

"My job as sheriff is to protect your rights and the Constitution, period," he said.

Hatcher said public employees need to remember who they work for.

"Unfortunately, there are elected officials who all too often forget who they work for," he said. "Everybody in this room is my boss. Jay Inslee need to understand that everybody out here is his boss, as well.

"He does not get to enforce his unconstitutional (initiatives, attacks)... As long as I'm here, I guarantee I'll fight for your rights. I'll for for our Constitution."

Hatcher reminded protesters that there is strength in numbers.

"We are stronger together," he said. "This is America. You get to choose what you want to do. If you don't want to go to Dana's restaurant, stay home."

Slovak, however, doesn't see himself as a leader. Instead, he calls himself a businessman just trying to keep his restaurant alive.

"I never thought I'd be in this position to fight to keep my doors open," he said.

Slovak credited his employees for leading the charge to stay open, saying he told them it would be a fight.

The restauranteer said that for the last several months, the mandates have kept him awake at night. And most recently, he said the shutdown orders have had him wondering if staying open is worth it.

The crowd responded by thanking him for staying open and taking on the governor. The crowd yelled together that "it's worth it."

A modest Slovak thanked the protesters and the patrons in his filled restaurant for their support.

"Your support is overwhelming," he said. 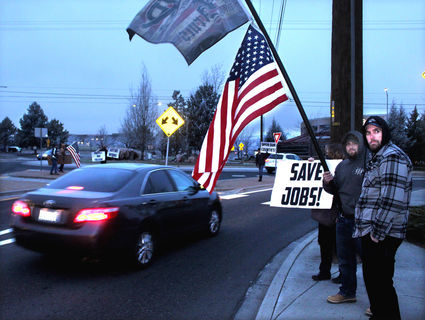 Slovak told the crowd to encourage other restauranteers and bar and tavern owners to open up.

"It's very important that buisnesses stand up," he said.

Slovak isn't the only one defying the governor's ban on inside service.

With winter settting in, several eateries around the state remain open, including Spiffy's Restaurant and Bakery in Chehalis, Farm Boy Drive-In Restaurant in Olympia, The Fairway Cafe in Lynden, as well as many others.

Many restaurants and taverns initially remained open, but have since shut their doors or switched to take-out only following visits by state Liquor and Cannabis Board agents threatening fines and revocation of liquor licenses.

Some of those include three Sterlings Restaurants in Kennewick and Richland, the Palouse Hyde Out in Colfax, Kimo's Sports Bar and Brewpub in Kennewick, among others. 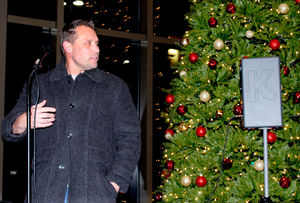 PASCO — The City Council will take up a coronavirus response ordinance Monday night that Councilman Pete Serrano hopes to strengthen into a "sanctuary" measure.

During a protest on Gov. Jay Inslee's shutdown orders Saturday night at Koko's Bartini in Kennewick, Serrano said he hopes to encourage his City Council to follow the lead of Mossyrock, a city on U.S. Highway 12 that has declared itself a "sanctuary city" from the governor's quarantine and shutdown orders.

The Pasco City Council meets virtually at 6 p.m. Monday, Dec. 7, to discuss its COVID-19 response in Ordinance No. 4021.

The ordinance currently doesn't include any language on being a sanctuary city, but Serrano said he hopes to push the issue.

The meeting will take place digitally and is open to the public.

Those wishing to address the agenda item are asked to fill out a form on the city website, http://www.pasco-wa.gov/publiccomment, prior to 4 p.m. Monday.