Dylllin Hoisington and Jayden Whittenburg, both 18, were traveling from Newport to Oregon on westbound I-90 when they said they hit black ice, about eight miles east of Ritzville Wednesday morning, Nov. 25.

RITZVILLE — Three people were involved in a two-vehicle collision this morning, Nov. 25, on the icy surface of westbound Interstate 90, eight miles east of the city.

Dyllin Hoisington and Jayden Whittenberg, both 18, were traveling from their home in Newport when the collision happene around 6:34 a.m.

"We drove over some black ice and I'm pretty sure we were trying to get into the other lane," Whittenberg said. 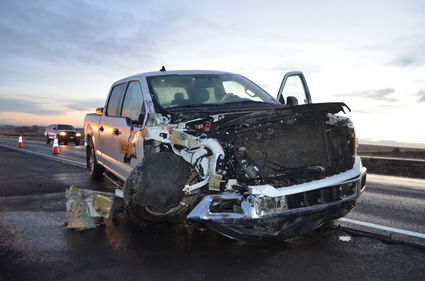 The car they were driving lay on it's roof on the shoulder of the right hand lane.

"It was on it's side first, and then the truck hit us," Hoisington said. "But we got out before it hit."

"Literally a couple minutes before it hit," Whittenberg said. "We were on our way to Oregon to spend Thanksgiving with my family."

The couple stood in a field near the interstate holding their 3-year old dog, Danny, while crew members from Adams County Fire District No. 1 searched for another dog, which Whittenberg said belonged to her mother.

Clay DeBoard, 28, of Cheney, said he was driving to his job with West States Equipment Co. when the collision occurred.

Also responding to the collision were EMTs with East Adams Rural Healthcare.