Nearly three dozen protesters rallied in front of Franklin County Commissioner Lowell "Brad" Peck's home Tuesday, Nov. 24, calling for him to stand up to businesses and return to work in his office in the county courthouse.

About 35 protesters led by Patriot Prayer's Joey Gibson carried U.S. flags and a bullhorn; they called on Peck to support local businesses in their fight to stay open amid new coronavirus mandates issued by Gov. Jay Inslee earlier this month. Protesters also called on Peck to return to work in his office in the Franklin County Courthouse, rather than continue to block in-person meetings of the elected commission.

Protesters gathered in front of Peck's 10006 W. Court St. home at about 11 a.m., calling on him to come out of his house and talk with them.

"The people are sick and tired of you hiding," he said. "We have businesses that are being destroyed; where are you?"

A shadow of someone in the house could be seen periodically on the opaque glass front door area of the home. Nearby, four women came out of a house at the end of the exclusive, waterfront subdivision to see what the commotion was about. An elderly neighbor also came out to listen to protesters.

"You can just sit here in your nice house, all comfortable, while you collect your paycheck, while the rest of the people in this community are hurting," Gibson said, with the crowd backing up his assertion that Peck has done nothing for businesses impacted by Gov. Jay Inslee's quarantine mandates. "Where have you been?"

Gibson pointed out that Peck is living in a very expensive house on a salary paid for by taxpayers who are losing their jobs and businesses due to the governor's coronavirus mandates.

Gibson said politicians are running and hiding from unconstitutional coronavirus edicts across the state. He called on Peck to "rise up and be a leader."

"I'm not here to attack you. I'm here to inspire you to be a leader," he said.

The crowd briefly chanted "open up" and "come on out."

Gibson said the crowd is going to get bigger and bigger until local politicians stand up for local residents and businesses.

The crowd followed by chanting, "No business, no peace."

Protesters then said the "Pledge of Allegiance" as the shadow in the doorway continued to come and go.

Another protester then took to the bullhorn.

"Open your door; come on out and talk to us in a civil manner," he said.

Richland nurse and political activist Lisa Thomas took over next, calling on Peck to come out.

"You have an obligation. You took an oath of office to serve the people. We are paying your salary and you didn't even show up for work," she said. "Why are you hiding?"

Thomas was among those plaintiffs who filed a lawsuit in May against Gov. Jay Inslee for his quarantine measures. That lawsuit was dismissed after the governor's attorneys argued that he couldn't be sued because he could not enforce the shutdown orders.

The crowd continued to goad Peck in an effort to get him to come out; he never did.

Shouting protesters called him a "coward" and chastised him for "hiding behind your wife."

About 20 minutes after the protest began, nine police units showed up.

Two officers went to Peck's front door and were admitted to the home. Another officer took up a position in front of the house, separating the home from the crowd.

Other officers lined up alongside the street, with a couple politely interacting with the crowd.

After some consultation with other city officials, police determined the road on which the protesters were standing was private road and asked the crowd to move back to the main section of Court Street at the end of Road 100. 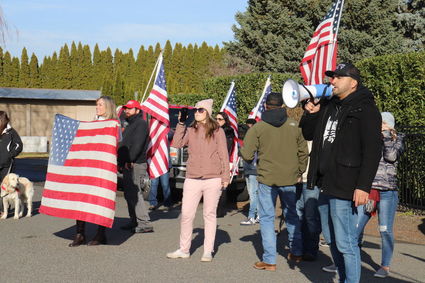 Led by Patriot Prayer's Joey Gibson, nearly three dozen protesters rallied in front of the 10006 W. Court St. home of Franklin County Commissioner Lowell "Brad" Peck's on Tuesday, Nov. 24, calling for him to stand up to businesses and return to work in the Franklin County Courthouse.

The protesters complied without incident.

County records show the subdivision road is private, but not owned by Peck. Police did not say if the actual owner requested the protest be moved or if they were acting at the request of Peck.

Rather than continue a few houses away, protesters decided to call it a morning and peacefully disbanded.

Later Tuesday afternoon, Peck called into a local radio station, where he claimed the morning protest was a "minor distraction," despite the large law enforcement presence.

"It wasn't a huge deal," he said, alleging it effected only an elderly neighbor.

The protest followed two previous protests - one Sunday night calling out state Liquor and Cannabis Board enforcement officer Austin Shively of Kennewick for allegedly threatening restaurant and bar owners choosing to remain open and a second that lasted two hours Tuesday morning on the steps of the Franklin County Courthouse in Pasco.