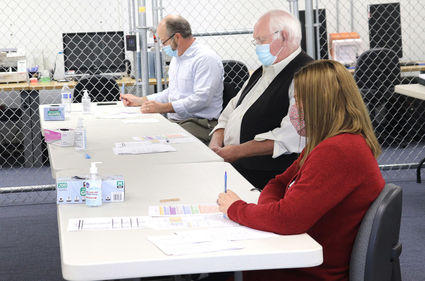 • 21 ballots were rejected because a voter didn't cast their ballot before the 8 p.m. deadline on election night (either they were postmarked late or they were not deposited in drop boxes on time).

• 387 ballots were rejected due to non-matching signatures

• 108 ballots were rejected due to no signature

Of the residents receiving two ballots, at least one voter, identified as "Mike," voted twice.

"It's against the law to vote twice," Beaton said, acknowledging the voter came forward to tell county he voted twice. "By the time we'd been made aware of it, both ballots had already been counted."

Koch said he knew that particular voter, adding "he was trying to prove a point."

He said he wasn't surprised other states that just recently implemented all-mail elections had voluminous problems.

"I'm disappointed the media is so quick to just extinguish what is going on," he said.

Still, he said, voters have "legitimate questions" when it comes to elections and vote counting, noting that if one error can occur, so can others.

"People cheat, steal and commit fraud," he said, adding he will be pushing the state to required periodic voter registration updates and a signature-matching system in the future.

According to Beaton, the non-matching signature issue could be partially resolved if voters had to update their signatures periodically. He noted that elderly voters whose hands shake often have a signature different from what state computers show.

Many of the non-matching signatures belonged to young voters, he said. Those who got their drivers license at age 16 without learning cursive may not have been able to actually "sign" at the time and are struggling to do so as adults. As a result, they don't have matching signatures.

After the ballot issues were reconciled, Canvassing Board members also took time to read an email from Virginia E. Lee of Spokane Valley requesting they not certify the election. The email appeared to have been sent to all of the 39 counties' canvassing boards.

"The election fraud possibly in all states of the USA causes me to plead with each county auditor in Washington state to please do not certify the votes in your county to the secretary of state," Lee wrote. "Our citizens need to know that our ballots are counted correctly - now and for the future...

"Please do not certify the votes until it has been determined that this national election was conducted lawfully."

But with all local ballots reconciled, the Canvassing Board certified the county results.

The results will now be forwarded to Washington Secretary of State Kim Wyman for her consideration and certification.

Please ask Beaton how he can prove the votes he sends to Kim Wyman are added to the tally correctly... in other words, can he validate that they are not being changed when they arrive in Olympia