Four hurt when three semi-trucks, a pickup, and a car collide on SR 395 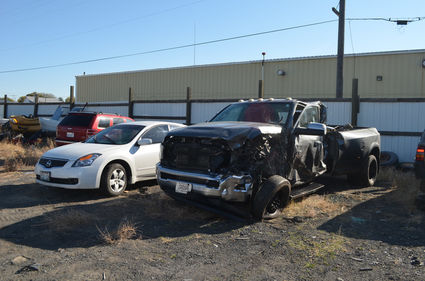 The damaged Nissan and Dodge pickup from the five-car collision on SR 395.

CONNELL - Four people were hurt when three semi-trucks, a pickup, and a car collided on State Route 395 near the Adams County line Wednesday.

Stephan W. Meuchel, 44, of Longview, may face charges of negligent driving in the second degree, according to the Washington State Patrol.

He was not wearing a seatbelt and was taken to East Adams Rural Healthcare.

Meuchel was driving a 2018 Freightliner semi-truck with a trailer north when his truck left the road, returned but overcorrected to slide the truck and trailer broadside along the highway. It ended up on its top on the right shoulder.

A second semi-truck, a 2018 International Harvester, driven by Terry J. Fullerton, 75, of Kennewick, drove through Meuchel's trailer. Fullerton was reported as injured but was not taken to a hospital.

A 2008 Nissan Altima, driven by Jose Solis, 19, of Sunnyside, swerved to avoid the semi-trucks and collided with a 2012 Dodge pickup, driven by James Noyes, 65, of Billings, Mont.

Solis and his passenger, Jovita M. Boatner, 19, of College Place, were reported as injured and taken to Lourdes Medical Center in Pasco. Noyes was taken to the Othello Community Hospital for treatment of his injuries.

The car colliding with the pickup caused the Dodge to hit Snider's trailer, according to the state.