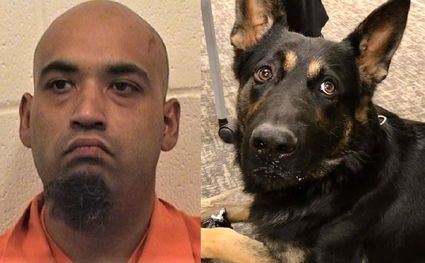 PASCO – A dog bite revealed a hidden suspect under a house on North Owen Avenue in Pasco on Wednesday afternoon.

The Tri-Cities Regional SWAT team and Pasco K-9 officer Josh Madsen and his partner K-9 Elan surrounded the house in the 200-block of North Owen and used a public address system in an attempt to convince Alfaro to surrender for arrest.

Officers entered the home with a warrant around noon.

"When he was not located upstairs, the crawlspace was checked. Fresh shoeprints were a clear giveaway, and Alfaro was given more commands to come out and surrender. When he failed to, K-9 Elan led the search team and located Alfaro with a bite to the arm," reported police.

Alfaro was treated by EMTs at the scene before being taken to jail.

"The arrest process broke a water supply pipe, which (the fire department) was good enough to turn off," state police.

Alfaro is accused of choking a woman on Saturday night until she passed out, hitting her with his fists, refusing to leave, and then took "some items" before he left.

"Officers observed non-life-threatening injuries and bruises on her consistent with that account," stated police.

Police ask anyone with additional information about this case to call emergency dispatch at 509-628-0333 about case 20-28856 Robbery, or email Det. Jon Davis at [email protected]