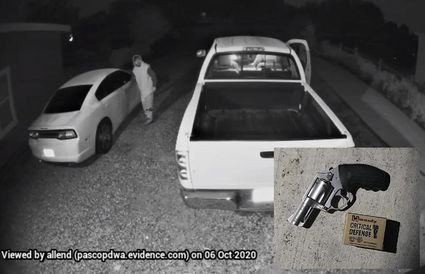 PASCO – A stolen gun was dropped by a pair of car prowlers in Pasco when interrupted by a victim.

A Charter Arms Bulldog Pug .44 revolver and box of Hornady Critical Defense ammo was recovered by police at a home on Road 78.

A man woke up after his dogs began barking around 2 a.m. on Friday. He activated his security alarm when he saw a man in a hoody in his pickup.

"He went outside to confront the suspect, only to find there were two of them, and they were now in the neighbors' driveway, pulling door handles. They ran off, and dropped the revolver and ammo," stated police.

The pistol was taken from the front console of the pickup.

They left, in what appeared to be, an older red Honda Accord, and police were unable to locate them.

Several car prowl victims reported thefts and some surveillance video of the duo working on parked cars along Road 78, Road 80, and Agate Street.

Police ask anyone with information about the car prowls to call dispatch at 509-628-0333 or email Officer Dave Dillsworth at [email protected] about case 20-28636 Veh Prowl.