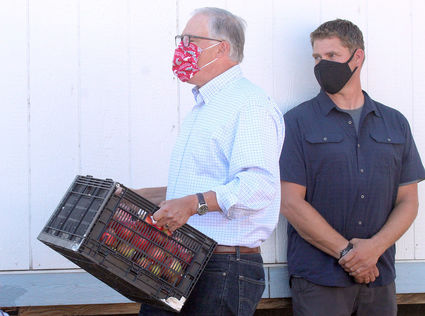 "I picked them up on Wednesday evening," he said. "We photographed and secured them. And yes, they are infested."

The governor presented the apples locally Sept. 10 as the state's "first installment" on support to victims of the Babb Fire, which destroyed 121 homes in the Malden-Pine City area.

In fact, the box of apples Gov. Inslee presented to Mayor Chris Ferrell remained on-site until Van Vleet picked them up Wednesday evening, Sept. 16, after hearing about contaminated apples also being presented in Bridgeport and Omak to victims of the Pearl Hill and Cold Creek fires.

Chelan-Douglas Horticulture Pest and Disease Board Director Will Carpenter put out a plea earlier that day asking for help in recovering the bug-infested apples before the larvae could find their way into crops there.

"It is of the utmost importance these apples are safely disposed of immediately," Carpenter said.

Those apples have since been recovered from a refrigerated storage unit.

Van Vleet said that he doesn't think many of the Malden apples were distributed as the apple bin he collected remained mostly full.

"I believe we have all he apples," he said.

But anyone who did take an apple needs to dispose of it properly so the larvae doesn't spread to local trees.

He suggested crushing the apples, sealing them in plastic bags and putting them out in the sun (when it returns) to heat up and kill the larvae, before throwing what's left away.

Whitman County used to have a large apple industry, he said. But in recent decades it's declined to just a few smaller operations, so the risk here is "minimal."

However, the county has a lot of Hawthorn apples as well as residential trees that are susceptible to the larvae.

He said that anyone who ate an apple has little cause for concern.

"It's just adding a little protein, as we say," he said.

After directing media be removed from a make-shift "town hall," Gov. Inslee spoke to residents Sept. 10, telling them he and First Lady Trudi Inslee personally picked the apples from the Governor's Tree, on the grounds of the Governor's Mansion in Olympia.

That location is within an apple maggot quarantine zone.

Inslee personally carried the apple bin from his black SUV into the meeting.

Two days later, he personally took apples from the same crop to Bridgeport and Omak.

Malden, Omak and Bridgeport are not in quarantine zones.

"It's unfortunate this has become political, but you jeopardize us when you bring fruit in (from quarantine zones)," Van Vleet said.

Under state law, Revised Cod of Washington 17.24.101, the transportation of apples from an apple maggot quarantine zone into a non-quarantine area is illegal. The first offense is a misdemeanor; subsequent offenses are gross misdemeanors.

"It's unfortunate this has become political, but you jeopardize us when you bring fruit in (from quarantine zones)," Van Vleet said the decision on whether the governor could face a misdemeanor charge here doesn't rest with him.

"It comes down to what the Department of Agriculture does," he said, referring further questions on enforcement to Yakima-based Michael R. Bush of the Plant Protection Division.

Bush was unable to be reached for comment this morning.

Gov. Inslee on Wednesday acknowledge the violation in a televised press conference.

"Trudi and I picked some apples off our tree at the capital residence as a gesture to the people to let them know in Bridgeport and Malden that they are not alone," he said. "Obviously, we regret that mistake."