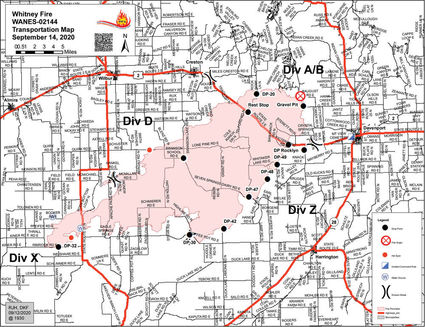 The map shows the scope of the Babb Fire.

MALDEN - Access to the Whitman County towns of Malden and Pine City continues to be restricted as crews continue to mop up Babb Fire hotspots.

The fire grew to 15,266 acres and was 90% contained, according to Northwest Interagency Incident Management Team No. 10, which was managing fire operations until 6 p.m. Monday evening. At least 110 firefighters and 26 engines remained in the area.

Local fire officials have since assumed control of the wildfire the swept across southern Spokane County and northern Whitman County on Monday, Sept. 7, destroying about 80% of the homes in Malden and about 50% in in Pine City.

The fire also destroyed a grain elevator in Pine City; that elevator continues to smolder.

Level I evacuation notices remain in place for St. John, Sunset, Thornton and Ewan, officials said. Level I notices indicate fire is in the area.

On Monday, fire crews were watching for flare-ups and strengthening control lines.

The blaze is one of three major fires still burning in the region.

The Manning Fire in Colfax has grown to 2,685 acres and is 90% contained with 40 personnel assigned.

And the Whitney Fire has grown to 125,123 acres and is 65% contained, with 340 personnel on-scene west of Harrington and south of Creston.

As of Monday, the Whitney Fire is the third largest active fire in Washington state, behind the Cold Springs Fire at 140,000 acres east of Omak and the Pearl Hill Fire near Bridgeport at 223,730 acres.